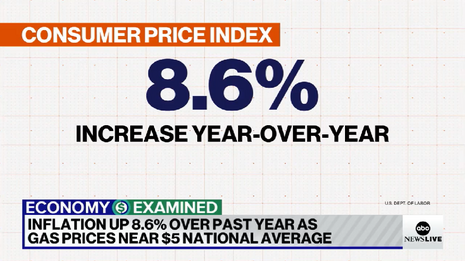 On the heels of Friday's May inflation report revealing that the consumer price index rose 8.6%, the highest monthly increase since December 1981, Atlantic magazine seemed to go into a state of mourning bordering on panic.

Gone were the sort of heady days of last summer when administration hacks, quoted approvingly by much of the liberal media, would smugly declare that any increase in inflation was merely "transitory." Those times of self-reassurance have suddenly been replaced by utter despair which the title of Friday's Atlantic reveals, "How Did They Get Inflation So Wrong?"

You can almost hear a very sad rendition of "Taps" playing in the background as author James Surowiecki delivers an article that sounds like a sad obituary for Bidenomics.

In March 2021, when inflation hawks were arguing that the Biden administration’s $1.9 trillion stimulus plan was going to overheat the economy, Yellen called the risk of inflation “small” and “manageable,” and a couple of months later said, “I don’t anticipate that inflation is going to be a problem.” She wasn’t alone. For much of 2021, Federal Reserve Chair Jerome Powell said that he thought inflation would be “transitory,” and even as inflation rose above 6 percent, the Fed kept interest rates near zero. (Its first interest-rate hike was not until March 2022.)

Of course, there was no demand by the author that perhaps either Yellen or Powell or both should be replaced due to their complete lack of foresight.

And now the added sorrow from the gut punch of Friday's inflation report:

Along the way, that thing Yellen thought was not going to be a problem became a huge one—not least, politically. Indeed, with today’s news that inflation in May was 8.6 percent (previously at 8.3 percent), it is arguably the biggest problem that the Biden administration faces—high prices are overshadowing pretty much everything else about the U.S. economy. The unemployment rate is a mere 3.6 percent, and last week, the Labor Department announced that the U.S. had added another 390,000 jobs in May. But all anyone wants to talk about is that average gas prices are now nearing $5 a gallon.

One interesting side effect of Surowiecki's grief is that it caused him to let his guard down and make a surprising admission.

...the Biden administration and the Fed were, in some sense, fighting the last war—that being, in this case, the Great Recession of 2008–09. After the steep economic downturn over those two years, the U.S. economy grew at a very slow clip. From 2009 to 2016, GDP growth averaged about 2 percent a year. Unemployment, which reached nearly 11 percent in October 2009, was still above 7 percent four years later, while median wages rose only slowly.

...And the Fed, under Ben Bernanke, had slashed interest rates to near zero and kept them there, while also trying to inject more money into the economy by buying up a wide range of assets in what was called quantitative easing. These measures did keep the Great Recession from becoming another Great Depression, but it wasn’t until 2016 that the economy really took off.

And what happened to the slow GDP growth after 2016 and what was it that made "the economy really took off" after that year? Perhaps Surowiecki can provide the answer to that inconvenient matter he brought up after the Bidenomics funeral services.