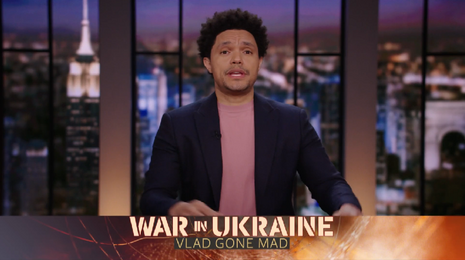 Perhaps nothing reveals the inept leadership of Joe Biden to the general public than a comedy bit that The Daily Show host Trevor Noah performed on Wednesday which sharply contrasted the utter lack of respect that Biden received from the leaders of Saudi Arabia and the United Arab Emirates with what their response would have been to Donald Trump if he were currently in the White House.

Noah was talking about how the American boycott of Russian oil has caused Biden to call the leaders of the countries above, as well as Venezuela, to plead with them to sell the United States more oil to make up the current fuel shortage. Unfortunately for Biden, the Middle Eastern leaders refused to even answer his phone call.

Noah contrasted that refusal to even talk to Biden with what their reaction would have been to Trump if he were still in the White House.

WATCH: Trevor Noah slams Joe Biden for not being respected globally and claims world leaders would pick up the phone if it were Donald Trump. pic.twitter.com/XzGrOCABDI

There is no denying that Saudi Arabia isn’t playing ball with Joe Biden. And you know what? You can say what you want, but this would have never happened to Donald Trump. Never. No one was ever ignoring Donald Trump’s calls. Beause if you ignored Donald Trump’s calls, you didn’t know how he would respond. Maybe he’d send an angry tweet, or maybe he’d just, like, ban your country from everything. You don’t know.

That’s why I bet in these situations, Biden actually wishes that he could hire Trump to step in as President Wild Card. You know? Just keep everyone on their toes. ‘Cause if Trump was calling, you best believe the UAE — they’ll be racing to pick up the phone.

“Too late, Ahmed, you made me wait two rings. We’re bombing the UAE and the UFC, just in case.”

This was a very funny yet brutal portrayal of Biden's ineffectiveness in sharp contrast to Trump played out on popular media. So brutal that it could be played as part of a very effective campaign ad against Biden in 2024... or even this year.