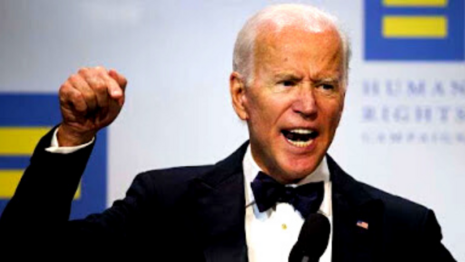 Right now Joe Biden and his administration are deeply unpopular . So how to reverse this situation? Return to enforcing immigration laws at the border? Cut wild spending in order to rein in inflation? Open up the Keystone pipeline and encourage drilling to lower the cost of gasoline? Naw! The secret is... TRASH TALK!

And who recommended that? Was it some local tough on the street corner? Nope. It was none other than the founding editor of Politico, John F. Harris, who on Thursday revealed "How Trash Talk Can Save Biden’s Presidency."

Harris' trash talk revelation came to him as a result of Biden calling Fox News reporter Peter Doocy an SOB a few days ago.

“What a stupid son of a bitch,” the president muttered, as though to himself, even as a hot mic assured that this sulfurous thought bubble did not stay with himself.

Biden later called the Fox correspondent for a conversation to “clear the air,” as Doocy described it. As the target of the insult, Doocy said Biden succeeded in doing just that.

The air between the reporter and the president, of course, is not the most important air that needs clearing from Biden’s perspective. It is the gap between the grand hopes Democrats had for his presidency a year ago and the present reality of a stalled agenda, a divided party, a rancid political culture and the haunting sense that he may not be quite up the task of turning all this around in time for 2022 and 2024 elections.

So is Biden just one "dirtbag" or "stupid schmuck" away from a trash talking his way to political greatness? Harris thought the whole exchange was "quite winning. It was also a reminder of how many memorable Biden moments feature casual profanity or bursts of authentic emotion amid the pervasive phoniness of contemporary politics."

Then Harris swooned over Biden's greatest trash talk hits of the past:

There was the famous time when he whispered to President Barack Obama at a White House podium that the passage of health care reform was “a big fucking deal.” Or when he told an Iowa voter who pressed him on his ethical and physical fitness for the presidency that, “You’re a damn liar, man,” before challenging him to a pushup contest. Perhaps Biden’s most memorable moment during the fall 2020 presidential debates was when he responded to former President Donald Trump’s incessant interruptions by rasping, “Will you shut up, man?”

As you read you need to keep reminding yourself that the author is a founding editor of Politico and not some eighth grade kid trash talking in the school cafeteria. You especially need to remind yourself of this when you come to Harris' fantasy for Biden to trash talk at the State Of The Union Address:

...Let’s see if polls show that others enjoyed the Doocy exchange as much as I did. If so, perhaps it’s time for Biden to cancel the tired tradition of recognizing American heroes at the State of the Union in favor of a new approach: I’d like to recognize in the audience tonight Al Miller, an inventory manager from Zanesville, Ohio. He’s basically a decent guy, but when he’s blathering about politics even his friends think he’s full of shit. C’mon, give me a break, man, and put a sock in it.

Yeah, you really need to pinch yourself as a reminder that it is the Politico founding editor who wrote up this silly trash talk advice. Oh, and put a sock in it, pal!