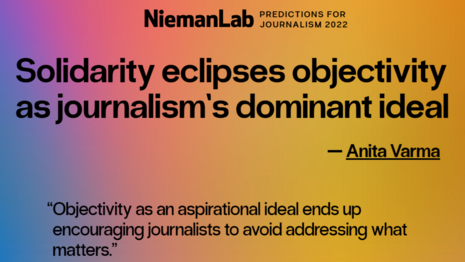 Media figures often love to profess their "objectivity." However, as with Chuck Todd who once proclaimed he was a mere "referee," few believe that laughable claim. In fact, a major journalism foundation, the Nieman Foundation for Journalism at Harvard University via its NeimanLab published a plea for ditching objectivity in favor of "solidarity for social justice." The author is Dr. Anita Varma, assistant professor in the School of Journalism and Media at the University of Texas at Austin.

Here is Varma's disdain for objectivity in favor of the social justice greater good which sounds as if it is straight out of Orwell.

Even in recent conversations about transforming journalism, objectivity as an ideal often gets a curiously free pass. The argument tends to go like this: “Journalistic objectivity has been implemented in ways that are not actually objective, but striving for genuine objectivity is still the best hope we have for accurate reporting.”

The problem with this argument is that it overlooks the inherent failures of objectivity, as an ideal and as a method for practicing journalism. Solidarity for social justice moves journalism in a better direction.

...Aiming for objectivity as a way to resolve uncertainty, though, leads journalism far astray from its public service purpose. Why? Because the concept of objectivity isn’t compatible with the pragmatics of news reporting.

...Striving for objectivity, then, leads journalism to a dead end. On the other hand, an ideal and method of solidarity for social justice is much more aligned with what the best journalists have always tried to do: inform the public of issues that matter, hold institutional power accountable, and challenge society to be better by urging us to care about more than ourselves.

Wow! Varma sure sounds as if she is channeling O'Brien for journalists.

Varma finishes up by celebrating that those few journalists who still strive for objectivity will soon be replaced by the "social justice" warriors in order to achieve "transformational change" as we enter the Brave New World of 2022.

Ultimately, rising news leaders and inclusive initiatives will push to replace people and organizations that cling to a vision of journalistic objectivity which has never been achievable or desirable, has never served the public, and has repeatedly proven itself to be a waste of shrinking resources in the face of social injustice that denies people’s basic humanity. As a new generation of news leaders takes the helm, solidarity has a chance to come to the fore.

Anyone who works on solidarity efforts for social justice knows all too well that lasting and transformational change is a long game. 2022 will be a year when we continue to fight for better.

One wonders if those professors and students at the University of Texas School of Journalism and Media who dare to disagree with Varma's premise about ditching objectivity will be sent to Room 101 for a very special learning session. After all, her philosophy of journalism appears to be prevalent nowadays in the mainstream media...and at journalism foundations.