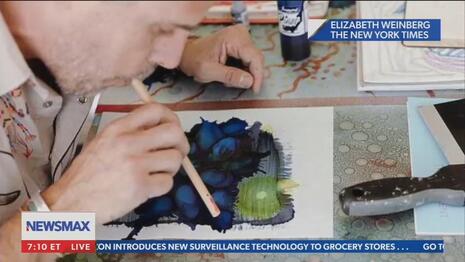 Move over van Gogh and Picasso. There is another artistic genius about to enter the scene. Hunter Biden. Until now, the world mostly thought his skills lay in his locomotive expertise thanks to years of riding the Amtrak choo-choo, according to Politico (though we've come to know it involved being adroit at doing cocaine).

However, we now find out that his choo-choo knowledge is way overshadowed by his incredible artistic talent which led him to search for "universal truth" through painting according to ArtNet on Monday with their Hunter the Painter paean to the artist in waiting by Katya Kazakina, "We Spoke to Hunter Biden About His New Life as a Full-Time Artist, and His Personal Quest for ‘Universal Truth’ Through Painting."

Although some might suspect that Hunter Biden is simply using paintings to launder bribes from those seeking favorable treatment from or influence with a certain "Big Guy," the ArtNet article should cast aside all doubts about his motivations and the abilities of the incredibly sensitive artist:

While he has no formal training, Biden has been making art since he was a child. In recent years, the practice has taken on a more formal, serious turn and he now works as an artist full-time. He has a dealer, Georges Bergès; a studio; and a collector base. A solo show is on the horizon. Bergès plans to host a private viewing for Biden in Los Angeles this fall, followed by an exhibition in New York. Prices range from $75,000 for works on paper to $500,000 for large-scale paintings, Bergès said.

Yes, it is very common for new artists to score $75,000 to $500,000 per painting as well as to hold private viewings at New York exhibitions. That should dampen any lingering suspicions of money laundering via art!

Kazakina went on to describe the great care and thought Hunter Biden puts into his art (click "expand"):

In the new house, the studio occupies a converted three-car garage, with a brick floor and a skylight. Biden usually gets up at 5 a.m.—before his 14-month-old son Beau, named after his late brother, is awake—makes a cup of coffee, heads over to the studio, and stares at a blank canvas.

He typically paints on a tabletop, horizontally, and doesn’t “fully envision what it will become,” he said. “At least, it never turns out to be what I started off in my mind’s eye at the outset.”

Working on canvas, metal, and Japanese Yupo paper, Biden’s artworks are often layered, with elements of photography, painting, collage, and poetry. Some are geometric abstractions, filled with patterns and somewhat hallucinogenic. Others depict trees, leaves, and body parts like outstretched arms.

All that's missing from Biden's artworks is layering with baking powder and dental floss.

But whatever material he uses, the main ingredient is "universal truth."

“I don’t paint from emotion or feeling, which I think are both very ephemeral,” Biden said. “For me, painting is much more about kind of trying to bring forth what is, I think, the universal truth.” It’s tempting to brush off a statement like this as a bunch of malarkey. But for Biden—a controversial figure who has been vilified by the right and uncomfortably ignored by the left—what is that universal truth, exactly?

“The universal truth is that everything is connected and that there’s something that goes far beyond what is our five senses and that connects us all,” he said. “The thing that really fascinates me is the connection between the macro and the micro, and how these patterns repeat themselves over and over.”

His concepts seem as shockingly novel as a 1970s New Age head shop that offers free Tarot readings. And as for the idea that Hunter has been painting as a form of therapy, he's already ditched that shtick for things much grander (click "expand"):

For Biden, who has been making art throughout his dad’s presidential campaign and the relentless scrutiny that accompanied it, creative expression is neither an escape nor a form of therapy. Although he told the New York Times last February that painting was what was “keeping him sane,” his motivations have become grander.

Today, “it’s not a tool that I use to be able to, in any way, cope,” Biden said. “It comes from a much deeper place. If you stand in front of a Rothko, the things that he evokes go far beyond the pain that Rothko was experiencing in his personal life at that moment.”

Exit question: Will Hunter Biden's first painting be sold to a Jungian fan of pattern-based work from Beijing or Shanghai?