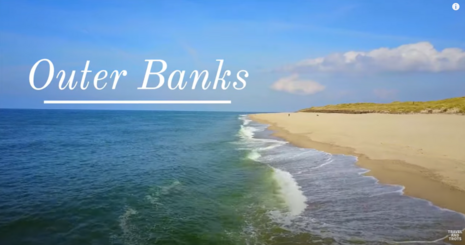 The Outer Banks of North Carolina has a problem that the New York Times tries to bury in order to hype their "rising sea" narrative as part of their broader climate change shtick. And what is the problem that the Times wants to avoid focusing upon because they have another agenda? Beach erosion.

Yup! That's it. It is a common problem on many beaches, including in South Florida which the New York Times is also avoiding in order to promote the narrative that the seas are rapidly rising. Perhaps the seas are rising (or falling) but that sea level change is something that happens very slowly over many centuries, not a matter of several feet in just a few years.

So well has the Times buried what the real, not fake news, problem is that you have to drop 23 paragraphs down from the beginning of the story to find it:

Speaking after the meeting, Mr. Outten defended beach nourishment, despite its being temporary. “I don’t think we can stop erosion. I think we can only slow it down,” he said.

And after that brief buried appearance, the inconvenient E-word no longer appears in the New York Times sales pitch since it runs counter to them selling the rising seas narrative.  And in case you haven't been sold on "rising sea" in the title, the Times also hits its readers with a big information box headlined "Let Us Help You Understand Climate Change" right dab in the middle of the narrative passing itself off as an article.

The main method in which Flavelle avoids repeating the word which barely speaks its name in his article is to cite "beach nourishment" which is another way to say put sand back on the beach because of... erosion.

County officials turned to what is called beach nourishment, which involves dredging sand from the ocean floor a few miles off the coast and then pushing it to shore through a pipeline and layering it on the beach. But those projects can cost tens of millions of dollars. And the county’s requests for federal or state money to pay for them went nowhere.

...He said he could imagine another two or three cycles of beach nourishment, buying his city 20 or 25 more years. After that, he said, it’s hard to guess what the future holds.

“Beach nourishment is a great solution, as long as you can afford it,” Mr. Cahoon said. “The alternative choices are pretty stark.”

...That impermanence, combined with the high cost, has led some in Avon question whether beach nourishment is worth the money. They point to Buxton, the next town south of Avon, whose beach got new sand in 2018, paid for through higher taxes. Now, most of that sand has washed away, leaving a beachfront motel and vacation rentals teetering over the water.

And finally we come again to that word that must be avoided even though it is what really causes the need for beach nourishment... "erosion."

Speaking after the meeting, Mr. Outten defended beach nourishment, despite its being temporary. “I don’t think we can stop erosion. I think we can only slow it down,” he said.

Of course, this latest entry of sea level rise hype is also bereft of actual data demonstrating the case. Instead the reporter merely expects us to assume without question that the sea is rising.

The risk to tiny Avon from climate change is particularly dire — it is, after all, located on a mere sandbar of an island chain, in a relentlessly rising Atlantic. But people in the town are facing a question that is starting to echo along the American coastline as seas rise and storms intensify. What price can be put on saving a town, a neighborhood, a home where generations have built their lives?

...“Based on the science that I’ve seen for sea-level rise, at some point, the Outer Banks — the way they are today — are not forever,” said David Hallac, superintendent of the national parks in eastern North Carolina, including the Cape Hatteras National Seashore, which encompasses the land around Avon. “Exactly when that happens is not clear.”