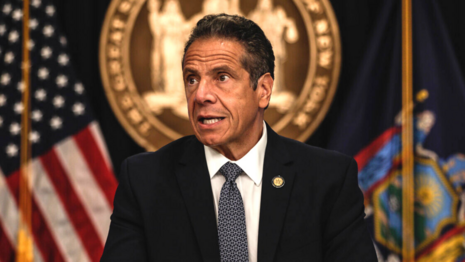 That phrase has become such a laughably familiar refrain that it has even made it into the Urban Dictionary which provides this accurate definition of the term:

A headline in a newspaper or other article that describes Republicans (or other right-leaning individuals) attacking a Democrat (or other left-leaning individual) when that Democrat commits a misdeed. Always written by a reporter with left-wing political views, it will attempt to frame the Republicans as overzealous, and will either downplay, ignore, or excuse the Democrat's misdeed. Commonly done by the New York Times or Washington Post, it is often viewed as a sign of the bias within the media.

The latest iteration of "Republicans pounce" comes to us from Politico which seems to never tire of the term despite risking being mocked for its incessant usage. Bill Mahoney went full pounce on Thursday in "Top Republicans call for Cuomo's ouster following nursing home revelation."

Yup! You can tell just from the title that there is the big pounce lurking somewhere in the article. And now the buildup to the inevitable pouncing by "overzealous" Republicans.

New York Republicans assailed Gov. Andrew Cuomo’s administration on Thursday night in response to new revelations about his stonewalling the release of information about nursing home deaths, with several calling for him to resign or be impeached.

The New York Post reported that top gubernatorial staffer Melissa DeRosa told Democratic state legislators in a meeting on Wednesday that the administration “froze” when asked to release data about the number of nursing home residents who had died of Covid-19. A March directive from Cuomo calling on nursing homes to admit patients who tested positive for the coronavirus has been blamed for contributing to high death rates.

DeRosa said the administration resisted the release of data because of former President Donald Trump’s attempts to turn the tragedy “into a giant political football,” according to the Post. “Because then we were in a position where we weren’t sure if what we were going to give to the Department of Justice, or what we give to you guys, what we start saying, was going to be used against us while we weren’t sure if there was going to be an investigation."

“I was explaining that when we received the DOJ inquiry, we needed to temporarily set aside the Legislature’s request to deal with the federal request first. We informed the houses of this at the time," she said. "We were comprehensive and transparent in our responses to the DOJ, and then had to immediately focus our resources on the second wave and vaccine rollout. As I said on a call with legislators, we could not fulfill their request as quickly as anyone would have liked. But we are committed to being better partners going forward as we share the same goal of keeping New Yorkers as healthy as possible during the pandemic.”

Forget that Cuomo was stonewalling the release of nursing home data for political reasons. The real culprit (Republicans) must be framed, as the Urban Dictionary describes it, as overzealous so as to downplay the misdeeds of poor Andrew Cuomo.

Nearly every top Republican in the state pounced on the Post's report, subjecting Cuomo to a barrage of criticism arguably unparalleled at any point during his decade in office.

Mission accomplished! Republicans pounced! Oh, and just to rub it in, those pouncing Republicans also subjected dear Andrew to a "barrage of criticism."

The story goes on to describe how some Democrats were also very critical of Cuomo but they never "pounced." That particular activity is reserved exclusively for Republicans in Politico and other liberal publications.