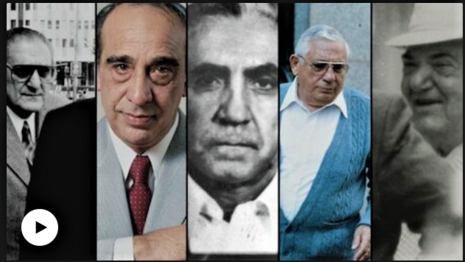 So what bothered Wilkinson about the documentary? Well, because it prominently featured Rudy Giuliani, because he was instrumental in bringing down the mob in New York. The problem for her was that many years later, Giuliani ended up as President Donald Trump's lawyer as well as friend. Oh, and the fact that Trump wasn't portrayed as some sort of mobster in the documentary also disturbed Wilkinson as well as you can see in "How Netflix’s new mafia documentary failed."

...Giuliani is a major and exalted figure in Sam Hobkinson’s Fear City: New York vs. the Mafia, a new three-episode documentary series on Netflix. Of course he is. Giuliani, after all, had a large role in the legal strategy that helped law enforcement break the stranglehold that five major mafia families had on the economy and culture of New York City in the 1980s. It would be weird to make a documentary about the era without including him in it.

But Rudy Giuliani circa 2020 is not the same cultural figure he was back then. Nor is, for that matter, Donald Trump, whose connections to the mob in that era and apparent adoption of mob-like tactics are no secret. Fear City — a true crime tale for the “law and order” crowd, laced with nostalgia for the good ol’ days — pulls off some wild feats of lazy filmmaking in its storytelling. And the wildest of them all might be an almost complete absence of any acknowledgment that the past is barely in the past, when it comes to this topic.

Um... Could you possibly forget about the politics of now and focus on the crime activity of back then as the documentary does?

Imagine making a documentary in 2020 about New York City, the mafia, and the 1970s and ’80s with only the thinnest possible reference to the current president of the United States — who, whatever you think of him, is a thoroughly relevant character.

Imagine watching a documentary about the mafia forty years ago without being absolutely obsessed with the politics of today. Could you possibly give it a try Alissa?

Or contemplate the decision-making that goes into including Giuliani — Trump’s future lawyer — as a pervasive presence and primary subject, alongside the New York attorneys and FBI agents he worked with, nearly all of whom are interviewed in similarly glossy settings, with everyone giving uninterrogated accounts as the film’s most reliable narrators. The more colorful former mobsters’ voices (mostly guys who did time or became states’ witnesses) become less significant once Giuliani and co. enter the picture — a working title for Fear City could well have been How Rudy Saved New York City from the Bad Guys: And That’s Why Law Enforcement Is Good. I had to scan the credits to confirm the series wasn’t funded by the Department of Justice.

When TDS infects every aspect of your being, this is the pathetic result.

If you want to check out a review of this documentary that isn't obsessed about current politics, RadioTimes published "Netflix’s slick and stylish doc is more than a gripping real-life version of The Wire."

What could be a same-old police procedural, Fear City puts the viewer directly in the heart of the case, examining photographs, video footage and wire recordings that feel very present and give the illusion you’re on the case. It’s all very riveting and exciting thinking you’re on to the biggest case New York has ever faced.