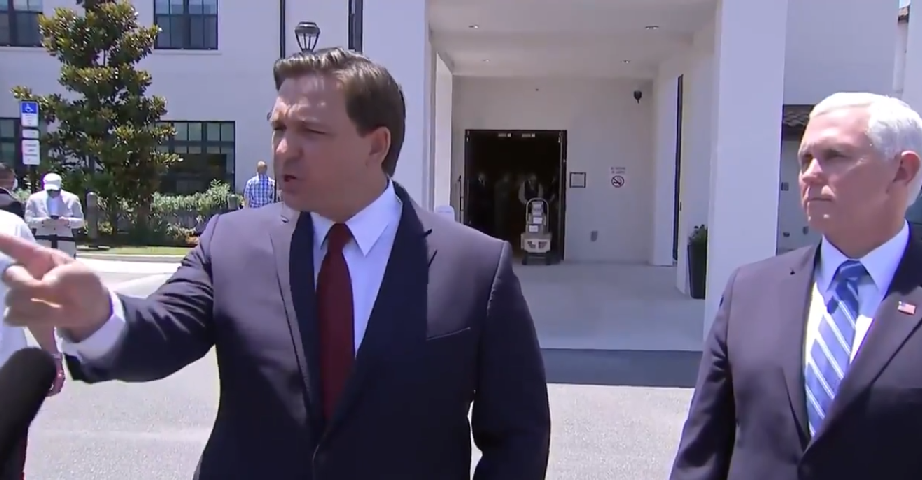 One governor made the mistake of ordering coronavirus patients back into their nursing homes resulting in almost 5000 deaths in those facilities in his state. The other governor took measures that resulted in a not only a flattening of the coronavirus cases curve but a general decline despite his state having a large elderly population.

So who do you think the media lavished praise upon while heaping scorn upon the other? Strangely enough it was the former governor, Andrew Cuomo of New York, who despite the high death rate in New York receives velvet glove treatment while the latter governor, Ron DeSantis, is regularly attacked by the mainstream media.

On Wednesday, the press went after DeSantis again over a report that a disgruntled employee of the Florida Department of Health, who has been fired for poor performance, claims she was asked to lower the coronavirus numbers even though that was not the case as you can see in this report. At that point DeSantis unleashed on the media for their absurdly unfair coverage as you can see.

Gov. DeSantis explodes on the media for their unfair coverage of his state’s handling of coronavirus.

DeSANTIS: Our data is available. Our data is transparent. In fact Doctor Birx has talked multiple times about how Florida has the absolute best data so any insinuation otherwise is just typical partisan narrative trying to be fun. And part of the reason is that because you got a lot of people in your profession who waxed poetically for weeks and weeks about how Florida was going to be just like New York. Wait two weeks, Florida is going to be next. Just like Italy, wait two weeks. Well, hell, we're eight weeks away from that and it hasn't happened.

Wow! Unfortunately many in the media will probably still try to buy that bridge in Brooklyn despite the source of the dubious report about supposedly manipulating the health data having been discredited. Hey, why let facts interfere with their Florida narrative?