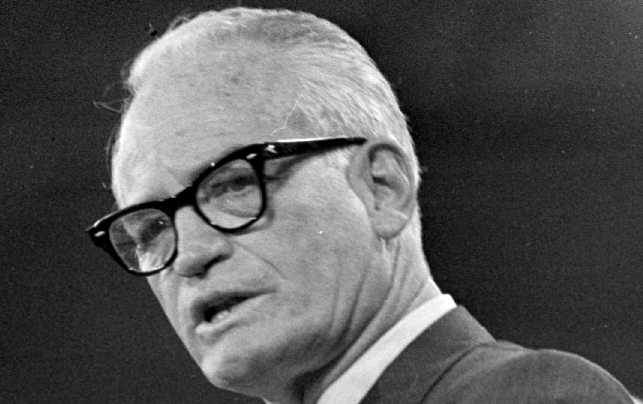 Whenever liberals in the media approvingly cite conservative leaders, like Ronald Reagan and Barry Goldwater, it’s to somehow contrast them as suddenly reasonable and sensible. Unlike the modern Republican Party.

So it’ not a shock that Politico is looking to Goldwater as a model for how the Senate GOP should respond to Donald Trump: In other words, tell him to resign. This is what the Arizona senator did with Richard Nixon in 1974. That way it would spare going through a Senate impeachment trial in which the all Democrat team of House managers would have to present their incredibly weak case.

Such is the fantasy of Garrett Graff who (surprise! surprise!) is now working on a history of Watergate. As with many other liberals, Graff yearns to relive Watergate despite no criminal charges against Trump. Graff laid out his fantasy on Wednesday in Politico with "Why No GOP Senator Will Stand Up to Trump." At least Graff is realistic enough to know that his fantasy wish will not be granted even though he desperately yearns for it.

Examining this critical turning point in Nixon’s presidency and the arc of the larger Watergate scandal carries with it today important lessons about the impeachment trial President Donald Trump is now undergoing. It also raises the all-important question of whether there’s a Barry Goldwater moment ahead in Trump’s future. Is there even a figure in the GOP left today to carry such a message to a White House under siege? Is there even a figure in the GOP whom Trump respects enough to listen to?

Of course, Graff conveniently overlooks that while Nixon lost Republican support during Watergate with several members of his party voting for articles of impeachment in the House, NO Republican voted to impeach in the House and most likely just as many will vote to convict in the Senate.

After whining about how Trump probably won't resign, Graff grumbles about how nobody around the President has the fortitude to tell him to resign despite an incredibly weak case for impeachment that was rushed through the House which then delayed sending it to the Senate:

As Trump’s circle has tightened and he’s expelled heavyweights like John Kelly, Jim Mattis, H.R. McMaster and Rex Tillerson, replaced them with ultraloyalists like Mike Pompeo and Bill Barr and downgraded and sidelined voices like Mick Mulvaney, it’s not clear that any outside adviser could or would offer any hard, straight talk to the president about the ongoing damage he could cause the country.

And why would any outside adviser tell Trump to do something completely stupid like fulfilling a liberal Watergate fantasy? Perhaps liberals such as Graff could relive their moment of glory over and over again by setting up a Watergate World theme park which would feature, of course, a "Goldwater Moment" ride.