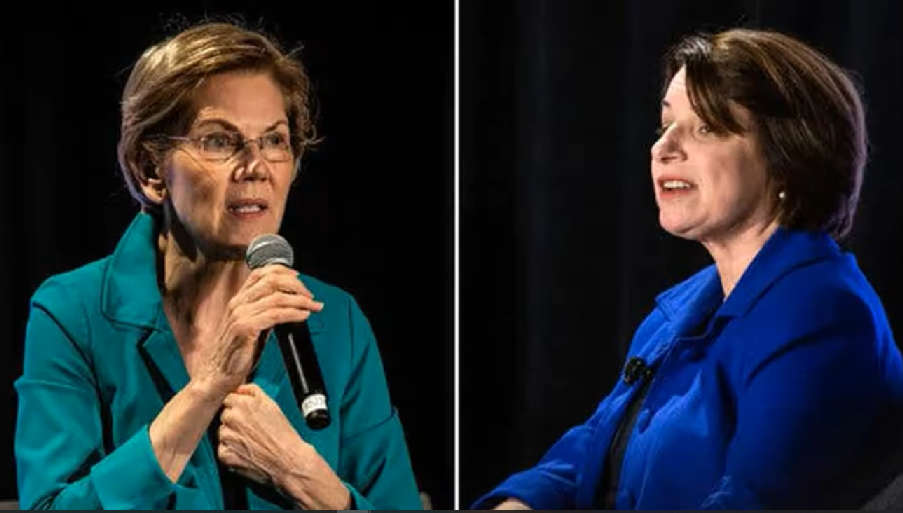 The New York Times has endorsed not one but two, count them, two candidates for President.  The beneficiaries of the Times split decision, after much self-important public soul searching, are Elizabeth Warren and Amy Klobuchar.

As the result, the immediate winner is...comedic entertainment in the form of widespread mockery of this split decision. Even many liberal sources are brutally mocking the newspaper's inability to settle upon just one candidate to endorse.

The entertaining tone of mockery was set by Nate Silver -- a former blogger for The New York Times -- with a classic tweet:

Equally brutal in her assessment of the Times endorsement fail is Ashley Feinberg of Slate who characterized it as a "choke."

After weeks of buildup, a slow trickle of candidate Q&A transcripts, and no less than four separate New York Times pieces about the process of a Times endorsement itself, we finally have an answer to the question the paper of record desperately wants to be on everyone’s mind: Who is the New York Times endorsing in the 2020 Democratic primary? That answer, revealed in a special edition of the paper’s FX show, The Weekly, mostly boils down to, uh, Warren, maybe? Unless you don’t like that. In which case, Klobuchar, I guess?

This marks the first time in its 160-year endorsement history that the Times has tried to give readers (or in tonight’s case, viewers) a sense of what actually goes into the process of a presidential endorsement....as much as the rollout of the Very Special Episode has been about the Democratic primary, it has also very much been about the New York Times and The Role of the New York Times in the Democratic primary. And in this state of hyper-self-awareness and inflated ego, the Times has done what the Times does best: choke.

...The indecisiveness might have felt less grating if the Times hadn’t put so much effort into turning the endorsement into a spectacle in its own right. The promised inside look at how the Times made one of its most ostensibly important decisions of the year turned out to mean viewers spent an hour watching the paper crumble under the weight of its own self-importance. But hey, at least the ratings were probably good.

Variety mocked the Times for being more interested in producing a television show than in making an endorsement:

Whether questions like “Do you own a smart speaker?” could find their way home to having somehow been germane when choosing a candidate is up for debate. But it seems apparent that the Times was more interested in producing an hour of television — one that depicted its journalists as plugged-in to something, if not the Democratic primary in 2020 — than an endorsement.

The New Republic called the endorsement exercise a "farce" in "The New York Times’s Endorsement Charade: A weeklong song-and-dance routine ends in farce."

This cycle, the Times has turned the selection into a weeklong affair, a mix between Donald Trump’s The Apprentice and LeBron James’s The Decision.

....On Sunday, the editorial page undermined the whole charade—and, really, the whole point of an endorsement—by choosing two, diametrically opposed candidates: Warren and Klobuchar. While nearly everyone else in the world of Democratic politics seems to have made up their mind, the board needs more time to choose between a more radical approach to fixing American’s many ills (represented by Warren) and a more conventional one (Klobuchar). The Times editorial page has taken its reputation for careful, sober decision-making to the point of paralysis—calling into question all the ostensible reasons for opening up the endorsement process in the first place.

Finally, the largely forgotten fake news purveyor Dan Rather got into the act with this tweet: "I endorse the Chiefs and the 49ers to win the Super Bowl."