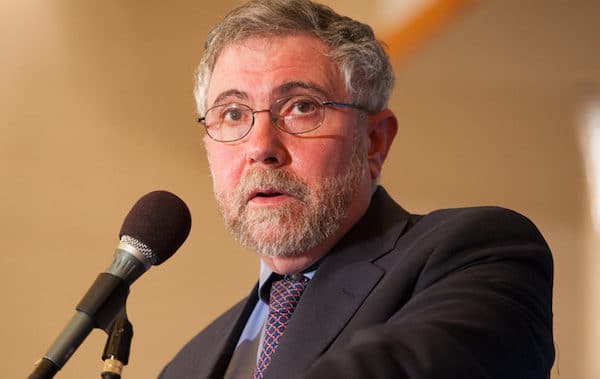 Just how far over the political edge do you have to be for even the liberal Atlantic magazine to notice that you suffer from a debilitating case of Trump Derangement Syndrome (TDS)? Perhaps as far gone as Paul Krugman whose raging TDS is so severe that Sebastian Mallaby, in a review of one of Krugman's books, worries that the optics of his extreme mania could be ruining the credibility of the New York Times columnist.

Mallaby lays out his concern for poor Krugman in the January/February issue of the Atlantic in an article whose title sums up the problem, "The Self-Sabotaging Rage of Paul Krugman."

Mallaby spells out the exact nature of that rage that he believes is destroying Krugman's reputation:

In short, Krugman is suffering from an especially public case of what’s come to be known as Trump Derangement Syndrome. Appalled by the Republican Party’s most bigoted leaders, whose rise he traces at least as far back as the George W. Bush administration, he has allowed himself to believe that nearly all Republicans are corrupt and evil, and therefore that reasoned argument is futile. “The modern G.O.P. doesn’t do policy analysis,” he pronounces.

Mallaby's description of Krugman's attitude, caused by his extreme TDS, is not exactly kind:

Strangely, and unexpectedly, the big reveal in Paul Krugman’s new anthology comes right at the end. All through the book, the reader wonders how so talented and fortunate an author came to develop such a furious and bitter voice. What drives a dazzling academic—the winner of the 2008 Nobel Prize in economics, no less—to turn his New York Times column into an undiscriminating guillotine for conservative foes? Krugman is substantively correct on just about every topic he addresses. He writes amusingly and fluently. His combination of analytic brilliance and linguistic facility recalls Milton Friedman or John Maynard Keynes. But Krugman can also sound like a cross between a bloodthirsty Robespierre and a rebarbative GIF. Week after week, he shakes his fist righteously at Republicans and anyone who defends them: You’re shilling for the fat cats. You’re shilling for the fat cats. Over and over. Again and again.

Yeah, being compared to a "bloodthirsty Robespierre" is not a really good look. However, Mallaby produced one very notable error in his observation as to Krugman being "substantially correct on just about every topic he addesses." Really Sebastian? Aren't you conveniently forgetting Krugman's most infamous prediction of them all made right after the 2016 election of Donald Trump:

It really does now look like President Donald J. Trump, and markets are plunging. When might we expect them to recover?

Frankly, I find it hard to care much, even though this is my specialty. The disaster for America and the world has so many aspects that the economic ramifications are way down my list of things to fear.

Still, I guess people want an answer: If the question is when markets will recover, a first-pass answer is never.

Hours after made that prediction a little after midnight on the day after the election, the markets soared. Of course, we know what has happened with the economy since then.