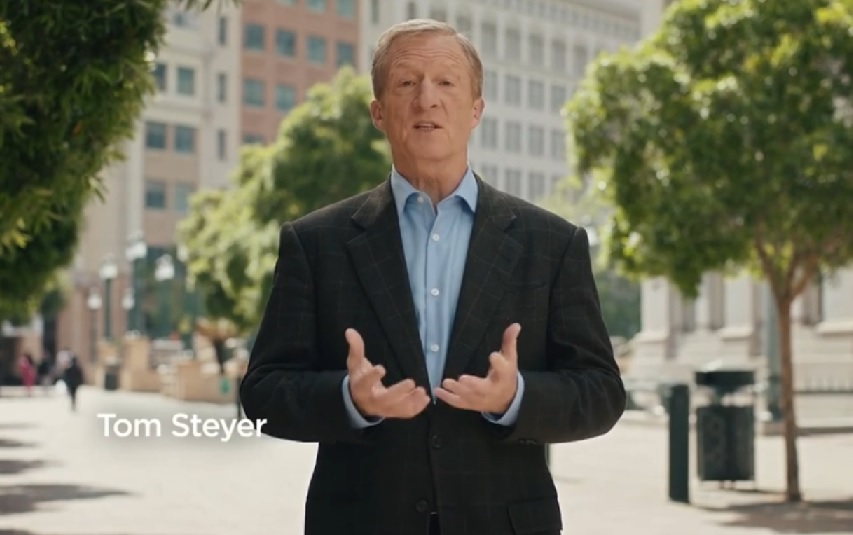 That's the way to sum up the Daily Beast description of wealthy Democrat candidate for president, Tom Steyer. The purpose of their Saturday article by David De La Fuente was to shame the Democrats into including "candidates of color' at their next presidential debate but a big take away from the story was that it basically described Steyer as a scam artist.

Not only were Democrats in general shamed in "Democrats Must Not Have an All-White Debate—and the White Candidates Should Say So" but what really stood out was the brutal slamming of Tom Steyer. Before we look at why De La Fuente is upset about the possible makeup of the next Democrat debate, let's get right to him verbally slapping Steyer around mercilessly:

Maybe there is an argument to be made for a smaller debate stage at some point, but the DNC has set up criteria that allows a billionaire to buy his spot while excluding serious candidates with a following and something to say.

And while we’re on the subject of Tom Steyer, he has spent $47 million of his own money in what amounts to a scam. Since he needs donors only to meet the DNC’s bizarre debate criteria, he has essentially purchased his donor base, through tactics such as selling $1 swag with free shipping—usually items worth far more than $1—that has nothing to do with him or his presidential campaign.

Why should he be allowed to “sell” a button about climate change or opposing Donald Trump for $1 and use that as some kind of indicia of popular support? He has also blanketed early states with enough TV ads and fancy mail to get his name identification up to the point that just enough people might utter it to a pollster because they recognize it.

Former Mayor Mike Bloomberg is eschewing debates thus far, but with his $52 billion in net worth it’s not hard to imagine clever ways for him to meet future DNC debate thresholds.

A debate stage that lets a white billionaire like Steyer buy his spot but excludes substantive candidates of color like Booker and Castro is neither democratic nor representative of the Democratic Party.

De La Fuente urges the all white qualifying Democrat candidates to boycott the next debate unless the "candidates of color" are allowed on the stage even if it means including the one candidate he doesn't like who has actually displayed some diversity of thought by criticizing Hillary Clinton, namely Tulsi Gabbard who unlike either Booker or Castro is now just one poll away from qualifying for the debate.

I personally like some of these candidates, such as Booker and Castro, while I am not fond of Gabbard. But whether I like them isn’t the point. It is not my place nor anyone else’s place to deny a candidate an equal opportunity to make their case.

It will be interesting to see if the qualifying Democrat candidates heed the call to boycott the debate unless "candidates of color" are allowed on the stage whether or not they meet the qualification rules set out by the DNC.

Exit question: So, um, what kind of stuff could one expect in a $1 Tom Steyer swag bag?