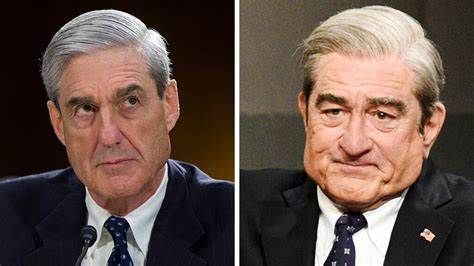 Robert De Niro, who portrayed a vigilant Robert Mueller many times on Saturday Night Live, claims that he was satisfied with the performance of the original last week before the two congressional hearings. However, you don't have to read very far  into his Monday column in the Washington Post before you can figure out that he believes who could have done a better job by portraying a much edgier Mueller during the hearings than the real life rather disengaged Mueller.

De Niro is also clear that he would have used a lot of profanity as Mueller: “I may have dropped an f-bomb or two or eight.”

First, De Niro rather disingenuously proclaims his satisfaction with how the real Mueller performed last week before he tells us what he really thinks in "De Niro: Mueller didn’t play me playing him on SNL. That’s good."

For the last year, I’ve had more experience playing Mueller publicly than Mueller has. Two months ago, I openly urged him to speak out, and while I’m sure it wasn’t my voice ringing in his head when he decided to testify, I like to think he would have been amused that his “Saturday Night Live” doppelganger was adding to the chorus telling him what to do.

I don’t want to criticize Director Mueller as an actor, so let’s just say my approach to the part would have been different.

You don't want to criticize Mueller but, as we shall see, that is exactly what De Niro does while fantasizing how his own performance would differ.

That’s a valid acting choice, don’t get me wrong. But I, more of a method actor, would have channeled my inner rage at the years of Donald Trump’s illegal and immoral acts, and I would have been more in touch with my fury after two years of Trump and his stooges accusing me of running a witch hunt. I would have dropped the unruffled exterior and been more, let’s say, expansive in my response. I may have dropped an f-bomb or two or eight. The emphasis would have shifted more to me — which is what audiences expect from their movie stars — while Mueller preferred to stay in the background, putting country and integrity first, and letting action and facts speak for him. These are old-fashioned values, not cool enough for today’s distracted audience. Even more important, the Academy doesn’t give Oscars for “calm, confident and dignified.”

Translation: I was frustrated by the real Mueller acting so passive and I only wish it had been me screaming like a mad man at the congressional hearings so I could let my inner rage spill out at the Republicans and the Bad Orange Man.