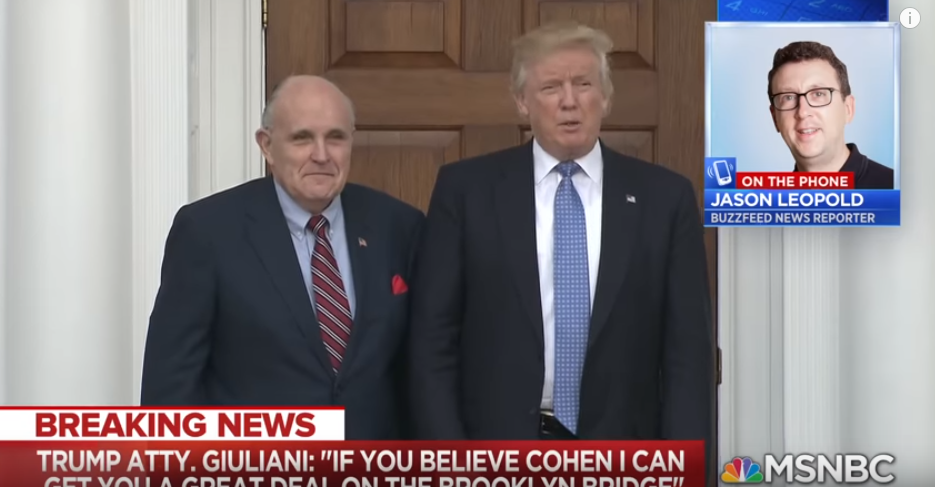 Buzzfeed reporter Jason Leopold along with Anthony Cormier broke the now increasingly discredited story that President Donald Trump directed Michael Cohen to lie to Congress about the Trump Tower project in Moscow. The story pretty much lost all credibility on Friday when Special Counsel Robert Mueller's team issued an unusual statement that the Buzzfeed story is "inaccurate."

This quick collapse of the Buzzfeed story should come as no surprise to anybody familiar with the dubious background of Jason Leopold. Back in 2006 Leopold, who was writing for TruthOut, was the source of the fake news report that White House Senior Adviser Karl Rove was about to be indicted on May 12, 2006. Almost from the moment that Leopold's story appeared in that publication, it immediately spread far and wide and was enthusiastically heralded by liberals across the country. Even Hillary Clinton who was a U.S. Senator at the time applauded this fake news of the Rove indictment when it was suddenly announced at a political meeting she was attending in Michigan.

The story about how the left and much of the mainstream media at the time swallowed Leopold's fake news story hook, line, and sinker is currently being replicated again almost 13 years later. The first episode of Leopold's fakery proved to be a highly embarrassing experience for some and a great source of mirth and mockery for many others.

The publication that carried the antics of Leopold and his gullible TruthOut colleague, William Rivers Pitt, in greatest detail was the DUmmie FUnnies, especially since many of their lame excuses for why the Rove indictment never materialized proved to be comedy gold.

Despite the fact that TruthOut, which stuck by Leopold's Rove fantasy many weeks after it completely collapsed, finally removed Leopold's "scoop," from their publication, it lives on for all eternity in the form of a Democrat Underground post made on that infamous but hilarious day of May 12, 2006 by William Rivers Pitt.

Within the last week, Karl Rove told President Bush and Chief of Staff Joshua Bolten, as well as a few other high level administration officials, that he will be indicted in the CIA leak case and will immediately resign his White House job when the special counsel publicly announces the charges against him, according to sources.

Details of Rove's discussions with the president and Bolten have spread through the corridors of the White House where low-level staffers and senior officials were trying to determine how the indictment would impact an administration that has been mired in a number of high-profile political scandals for nearly a year, said a half-dozen White House aides and two senior officials who work at the Republican National Committee.

Speaking on condition of anonymity, sources confirmed Rove's indictment is imminent. These individuals requested anonymity saying they were not authorized to speak publicly about Rove's situation. A spokesman in the White House press office said they would not comment on "wildly speculative rumors."

Yeah, just like Leopold's "sources" are now claiming they have documents that show that President Trump ordered Michael Cohen to lie.

Well, May 12 came and went without the expected Rove indictment. By Sunday, May 14, Leopold's TruthOut colleague William Rivers Pitt was wondering what was happening with the Rove indictment that was guaranteed to occur by Leopold. He posted the hilarious excuse that Leopold gave him that was so epic in its historic lameness that he actually believed that it lives on as the legend of the "24 business hours" that is still following poor Pitt to this day as a testament to his extreme gullibility.

I just got off the uphone with Jason Leopold who clarified something for me that is pretty damned important. In his article, he said: "During the course of that meeting, Fitzgerald served attorneys for former Deputy White House Chief of Staff Karl Rove with an indictment charging the embattled White House official with perjury and lying to investigators related to his role in the CIA leak case, and instructed one of the attorneys to tell Rove that he has 24 hours to get his affairs in order, high level sources with direct knowledge of the meeting said Saturday morning."

In point of fact, those 24 hours are "business hours," i.e. starting on Monday.

"Jeez, Jason," I said, "we might want to put that into the essay. Half the planet thought 24 hours was 24 hours. They thought the deal would go down today."

To be fair, a dozen eyes looked at that article yesterday before we published it, mine included, and none of us caught that. The word "business" has been inserted into the story after "hours" where it belongs:

So. Monday at the very earliest, but more like Tuesday or Wednesday.

Or Thursday or Friday. Or 2007 or 2008. Or 2018 or 2019. Yes, all these years later William Rivers Pitt and the rest of the world are still waiting for those 24 business hours to finally elapse. And now we are apparently waiting another 24 business hours until Jason Leopold's Buzzfeed story can be verified.