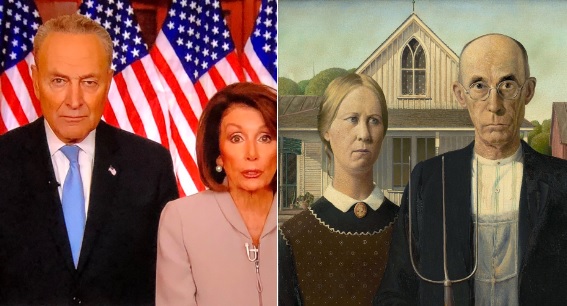 The rather stiff response by House Speaker Nancy Pelosi and Senate Minority Leader Chuck Schumer quickly inspired several funny memes on the web. One such meme noted that the stilted response by the pair resembled a hostage tape. All that seemed to be missing was them holding up a newspaper front page so we could note the date. Another meme was that they seemed to have the attitude of disapproving parents upset that their kid returned home way past curfew time.

However, the one meme that seems to have caught on in a big way was that they appeared like the father and daughter in Grant Wood's famous 1930 painting, "American Gothic," which is displayed at the Art Institute of Chicago.

The words of their response were hardly out of their almost immobile faces when Twitter started to be flooded with the "American Gothic" meme.

Trump delivered his speech alone from behind his desk, while Speaker of the House Nancy Pelosi and Senate Minority Leader Chuck Schumer stood next to each other with American flags in the background.

But it was the two Democrats' stoic stares and stiff stances that had many Twitter users poking fun and noting some art history references.

The famous "American Gothic" depicts a woman and man with a pitchfork standing tall in front of a house, and some thought to two lawmakers were shoo-ins for a recreation of it.

Even NewsBusters analysts were on the trend early:

We don't have to wait for #SNL to jump on this one. Twitter pokes fun of Schumer, Pelosi 'hostage tape,' 'American Gothic' vibe. https://t.co/MlZtVDVRUG

Pelosi and Schumer as American Gothic is the best part of 2019 politics so far. pic.twitter.com/bjnZwQEExq

This trend certainly was a great part of politics so far in this very young year.