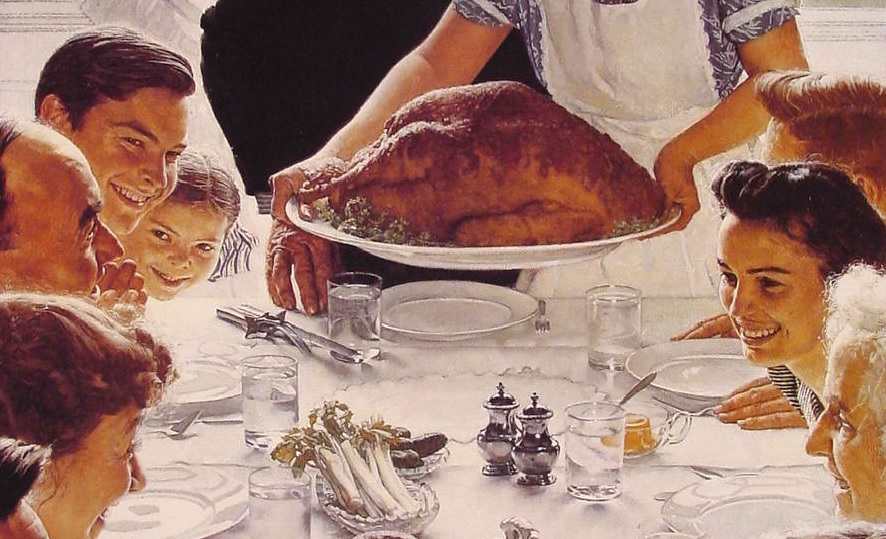 There are many things to be thankful for this Thanksgiving and among them is the thought that chip-on-her-shoulder Harper's Bazaar writer Rachel Elizabeth Cargle will not be sitting at your Thanksgiving table (unless you are at that one very unfortunate table where she will be sitting).

Why? Because Cargle has come up with a bunch of ways to destroy the Thanksgiving mood by going annoyingly political as you can read in her November 19 article, "How to Talk to Your Family About Racism on Thanksgiving."

Cargle kicks things off by dispensing advice from a famous American Communist:

After a year of relentless atrocities that don’t always make for easy conversation at the dinner table, it's important to make Thanksgiving preparations beyond the tablescape and the menu. This year, I want you to prepare for something a little more nuanced than stuffing or cranberry sauce: I want you to prepare to rock the family boat, with important discussions that stretch beyond the surface of “How's the weather?” and “Who are you dating these days?” So, I'm coming to you with a guide that should push you beyond apathy, and instead, teach you how to be a part of the solution. As Angela Davis reminds us, it is not enough to not be racist. You have to be anti-racist, and if you are not actively being part of the solution, then you are a part of the problem. So here is some language to help you navigate Thanksgiving day dinner.

Right. Because at Thanksgiving dinner one always wants to take advice from a Communist such as Angela Davis. Oh, and as Karl Marx reminds us, "The theory of Communism may be summed up in one sentence: Abolish all private property," so I'm sure you won't mind me taking that turkey wing from your plate, Elizabeth.

We can start with a few obvious points: Columbus was not a hero but in reality a destructive colonizer whose conquests lead to the massacre of millions of native Americans.

One discussion that is likely to come up on Thanksgiving is the kneeling protest that football players—most notably Colin Kaepernick—are taking to bring awareness to the widespread police brutality against black bodies all across the country.

Maybe it is likely to come up at your table but at our dinner, a lot more concentration will be placed on washing down turkey and stuffing with Moscato. Lots of Moscato.

White people have always had the upper hand over people of color. The only way we can work toward this true 'colorless' equality that we’re dreaming of is to actively do the work to dismantle the oppressive systems our forefathers built—not simply dismiss the realities of black people.

And since the author is a disciple of Angela Davis, the oppressive system she is referring to must be Capitalism.

White privilege is a topic that has been a hard pill to swallow for many people in the white community. They will say “But I have no privilege! I wasn't born rich and I worked hard for everything I have. Don't paint me as a bad person just because I was born white.”

It would be hard to swallow anything with the hectoring Cargle sitting at your table reciting annoying lectures recycled from the Red Guard.

The idea that white people must be held accountable is not rooted in hate—though that’s how some people skirt around these gnarled conversations. With statistics like 62 percent of white women voting for Roy Moore in the Alabama special election, even after his several misconduct allegations; or a majority white population pushing for a wall to displace immigrants while they are descendants of immigrants themselves, they will say, “Just focus on love and all the good things that are happening and the rest will work itself out.”

Is it okay if we hold YOU accountable for ruining our Thanksgiving dinner with your insufferable leftist self-righteousness?

The Black Lives Matter versus All Lives Matter debate may be one you’ve found yourself trying to navigate. At the dinner table this may come up as a defense to your advocacy for the lives of this country’s marginalized groups.

This might shock you but the topic has never come up at our Thanksgiving dinner table and probably at the vast majority of other tables as well.

These conversations will never be easy but they will always be necessary. Words are not just bubbles that float into air then dissolve. Words are the things that form ideas and opinions—the things that ultimately guide our actions. Being apathetic to issues of race is not “taking the high road” or “opting out of politics.” Being engaged and aware is being responsible for what role you play in the collective community of livelihoods—the mothers, daughters, fathers, sons, teachers, school children, neighbors—that we are a part of. As America sits down to give thanks for a country founded on the pain of many, we can't dismiss the irony of what is being celebrated.

How about the irony that you probably won't find much in the way of any food, much less turkey, at the tables in countries such as Cuba and Venezuela? Lots of communist/socialist pain in both. But, hey, you could happily engage in Angela Davis type dialectical chit-chat in both places.