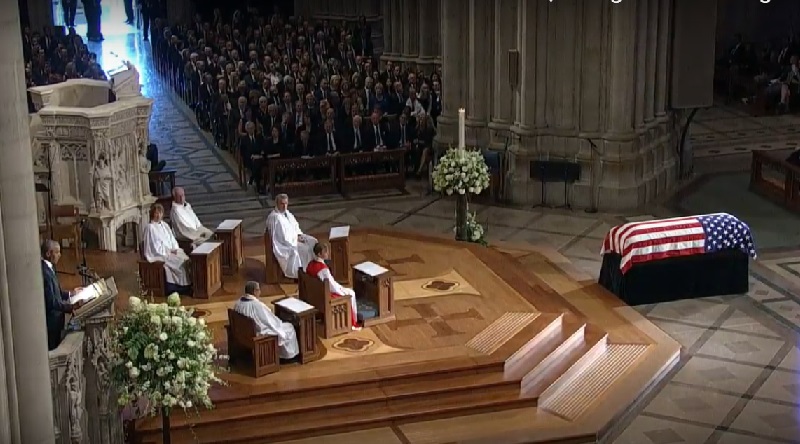 his newspaper about the memorial service for the late Senator John McCain. However, there was another person who was uppermost in Baker's mind judging from his story. Need I really spell out who that person was?

You can see the name that caused Baker to become so deranged over his mere existence that his McCain memorial service ended up really being not so much about the senator but about the one who was the bookend of his story title, "In McCain Memorial Service, Two Presidents Offer Tribute, and a Contrast to Trump."

Former Presidents George W. Bush and Barack Obama, the two men who thwarted Mr. McCain’s ambitions to become commander in chief, stood one after the other before the nation’s elite at Washington National Cathedral on Saturday to honor the man they beat, extolling him as a one-of-a-kind figure the likes of which will not be seen again anytime soon.

That they were asked, and not the current president, spoke volumes about the man and the moment. And while neither explicitly mentioned President Trump, who, uninvited and unwelcome, went golfing instead, their tributes could hardly be heard without the unspoken contrast to the current occupant of the Oval Office, a message amplified by a more overt rebuke from the senator’s daughter.

So right away we see Baker reinterpret the McCain memorial service as yet another predictable Trump hit piece.

Mocking Mr. Trump’s favorite slogan, she later declared: “The America of John McCain has no need to be made great again because America was always great.” The audience then burst out in applause, something that rarely happens during the traditionally solemn funerals held at the cathedral.

That was the third of yet three more paragraphs focused on the one that poor Peter Baker can't seem to remove from inside his head.

While Mr. Trump was absent, political figures from both parties made their way to the house of worship on a dreary, overcast and humid morning. They came to bid farewell to John Sidney McCain III, son and grandson of admirals, naval aviator, tortured prisoner, congressman, six-term senator, two-time presidential candidate, patriot, maverick, reformer, warrior, curmudgeon, father, husband and finally, in death, American icon.

No, that wasn't the final encore. There is still a lot more Trump obsession to go.

For his part, Mr. Trump spent the morning railing again on Twitter about his opponents, the news media and the investigation into his campaign’s interactions with Russia during the 2016 election.

He quoted supporters asserting that the investigation was rigged “to spy on Barrack Obama and Hillary Clinton’s political opponent” (misspelling his predecessor’s name) and that “this is the scandal here — a police state.” He complained about “corruption at the DOJ & FBI” and said the news media “has become tainted and corrupt!”

On his way to the golf course he unleashed a few more combative tweets threatening to terminate a trade agreement with Canada and warning that “Congress should not interfere w/these negotiations.”

Pardon me for noticing but does it not seem like McCain became something of a sideshow in Baker's version of his memorial service in which the real focus is upon the one living rent-free 24/7 in his head?

Baker did manage to jot down a number of paragraphs without referring to his obsession... until he suffered another relapse:

Mr. Bush, who refused to vote for Mr. Trump in 2016, was more oblique in his talk than Mr. Obama, but his description of his onetime rival still struck many in the audience as a contrast to the current president. “Perhaps above all, John detested the abuse of power,” Mr. Bush said. “He could not abide bigots and swaggering despots. There was something deep inside him that made him stand up for the little guy — to speak for forgotten people in forgotten places.”

Good thing Peter Baker didn't cover Winston Churchill's memorial service or it could have really been all about Anthony Eden.