Case closed! The body language of President Donald Trump meeting with Russian President Vladimir Putin in Moscow reveals that there is a strong possibility of collusion. Impeach now!

That is one reason why Politico's editor in chief Blake Hounshell has proclaimed on July 20 that he is no longer a skeptic of Trump-Russia collusion. See, back in February, on the heels of Special Counsel Robert Mueller's  indictment of a number of Russian companies but with no finding of collusion with any American,  Hounshell declared himself a skeptic. However, now that a second set of indictments of Russians have been issued also with no evidence presented of collusion with any Americans, Hounshell suddenly has declared himself as no longer being a skeptic.

So what caused Hounshell to stop being a skeptic despite no evidence of collusion by Mueller and his merry band of intrepid Democrats intensely investigating this matter for over a year? In large part it was because of Trump's body language at Helsinki. I kid you not.

Hounshell makes his body language case in "Why I’m No Longer a Russiagate Skeptic." The subtitle is "Facts are piling up, and it’s getting harder to deny what’s staring us in the face." Before we are entertained by his body language rationale, let us get a good laugh at some of those "facts" that "are piling up."

At the NATO summit in Brussels, Trump attacked a close European ally—Germany—and generally questioned the value of the alliance.

Hmmm... Is Hounshell very conveniently leaving out why Trump criticized Germany? Could it be because he criticized Germany for supporting a Baltic Sea gas pipeline deal with Russia and saying Berlin had become "a captive to Russia." Could it be that he left out that important detail because it undermines his case that Trump is somehow Russia's stooge?

As to Trump's criticism of NATO, it was more like criticism of NATO members who haven't been paying their fair share to that organization. Another detail Hounshell left on the editing floor. Perhaps Politico should poll voters if they agree with Trump that NATO member nations should pay their fair share. I would be surprised if the "no" response were much higher than 10 percent.

Okay, I know what you all are waiting for; Hounshell's amusing body language analysis of Trump that helped him shed the skeptic garb he claims he had. 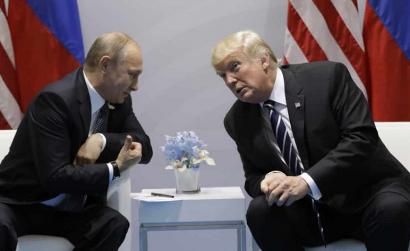 With every other world leader, the physically imposing Trump attempts to dominate—witness his alpha-male handshakes with French President Emanuel Macron or his flamboyant man-spreading next to German Chancellor Angela Merkel. Yet with the diminutive Putin—who is maybe 5 feet, 6 inches tall—he’s oddly submissive. During the public portion of their encounter, Trump was slumping in his chair, as if defeated. Why? Why did he insist on a one-on-one meeting with Putin in the first place?

He slumped in his chair? IMPEACH NOW!!! We also need to find a tape of Trump's alleged wink at Putin and do a frame by frame analysis ala Zapruder film to detect even the slightest evidence of collusion.

So why would a Politico editor go to such ridiculous lengths to suggest possible collusion? It could be that liberals have become so afflicted with Trump Derangement Syndrome that even proclaiming oneself a skeptic on that topic has become an unforgivable Thought Crime. Yes, Hounshell has made himself a laughingstock but at least he helped to guarantee himself a measure of Politico job security.