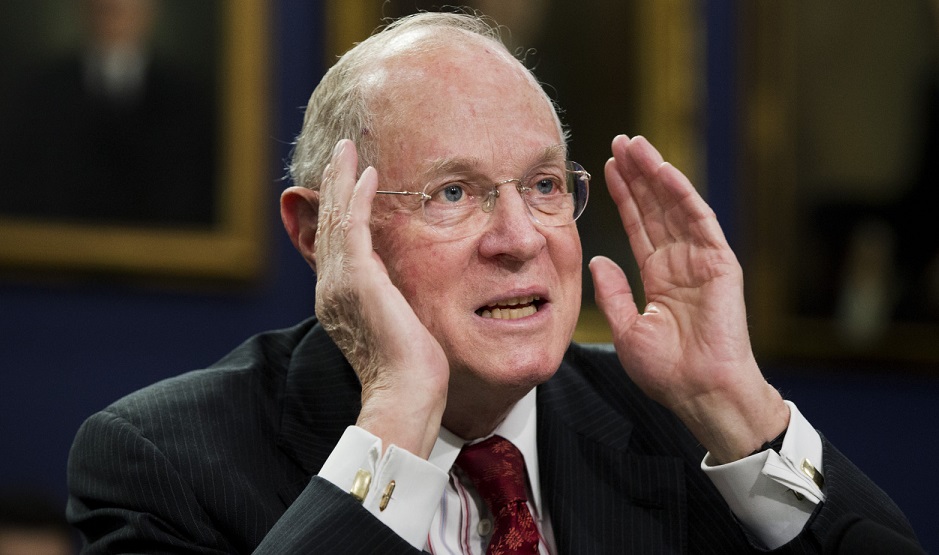 Remember all those times during the Barack Obama presidency when the New York Times begged Justice Anthony Kennedy to not retire from the Supreme Court? No? Well, that's probably because it never happened. However, now that Donald Trump is president, the Times is begging Kennedy, considered to be a swing vote, to remain on the High Court bench.

Their April 28 editorial page beseechments for Kennedy to forego retirement seems to have the tone of the great James Brown singing Please, Please, Please! at the 1964 Teenage Awards Music International Show in Santa Monica, CA which many believe to have been the greatest rock performance of all time.

Let us now join the New York Times Editorial Board as it performs its own version of Please, Please, Please! in Please Stay, Justice Kennedy. America Needs You.

As you have no doubt heard, rumors of your impending retirement are, for the second year in a row, echoing around Washington and across America. While you and your colleagues on the Supreme Court were listening to the final oral arguments of the term in recent days, those rumors were only growing more insistent.

How can we put this the right way? Please don’t go.

Sitting between the four liberal justices and the four conservatives, you are the most powerful member of the most powerful court in the country, as you have been for at least a decade. Your vote, more than that of any other justice, has delivered landmark legal victories for Americans of all political stripes, from gays and lesbians seeking equal rights to African-American college students seeking a better education to deep-pocketed corporations seeking to spend more money influencing politics.

It's not difficult to envision a parallel universe in which Hillary Clinton won the 2016 election and the Times editorial board on April 28, 2018 of that universe asked Anthony Kennedy to retire to make way for new (liberal) blood.

They smell blood — if they can install another rock-ribbed conservative like Neil Gorsuch, the court will have a locked-in right-wing majority for the rest of most of our lifetimes. They won’t even have to steal a seat to do it.

And from the makeup of the current court it isn't hard to imagine it going 6-3 or even 7-2. The stuff of New York Times nightmares.

Have past justices given a thought to politics when considering the timing of their exit from the court? Of course they have, whether or not they copped to it. But this moment is about so much more than partisan jockeying. We can’t know what is in your heart, Your Honor, but we do know what your departure right now would mean for the court, and for the nation. It would not be good.

Your record is more conservative than liberal, but there’s no question that you are less of an ideologue than anyone President Trump would pick. How do we know? Look at his first nominee, Justice Gorsuch. Perhaps you were comforted by this choice — a well-qualified judge who clerked for you, and who would have been on any Republican’s short list. But Justice Gorsuch has already made it clear that while he’s a fan of individual liberty, at least in some cases, he is unlikely to go to great pains to protect your most cherished values — equality and human dignity.

I'm not sure it is wise for the Times to try to convince Jusitice Kennedy by badmouthing Gorsuch.

Do you want to give your seat to a president whose campaign and administration are under criminal investigation, whose closest aides have been indicted or have pleaded guilty to federal crimes?

Oh, yes. The investigation into Russian collusion. So how is that going?

We realize this isn’t an entirely fair request. Every 81-year-old, especially those who have devoted their lives to the service of their country, should have the freedom to retire without worrying that the nation’s future may hang in the balance. But this is the world we live in.

Could you just stick it out until you are 84 years old or, possibly/probably 88, until You-Know-Who is no longer president?

This is your court, Justice Kennedy. It is facing an institutional crisis, and it needs you.