Dana Milbank: 'Democrats’ Behavior at the State of the Union Was Embarrassing'

You can get an idea of how ridiculous the Democrats acted during (and after) President Donald Trump's State of the Union Speech on Tuesday by the fact that even as liberal a columnist as Dana Milbank of the Washington Post has found them to be embarrassing. Milbank is hardly an admirer of the President since last September he wrote a column claiming that Donald Trump is killing him followed later that month with the complaint that Trump is "Driving Us Crazy." However even Milbank has complained about the attitude of the opposition party in Democrats’ behavior at the State of the Union was embarrassing:

It gives me no pleasure to say this, but the Democrats’ behavior at the State of the Union was embarrassing.

Noticing the all too obvious, eh?

I take a back seat to nobody in decrying President Trump’s cynical and divisive performance. He repeatedly exploited Americans’ divisions on race, guns, God, immigration — anything to distract from the broken promises, vulgarity and worse that define his presidency.

But the Democrats, with their childish protests, took the bait. Symbolic dissent is fine, but this was a cacophony of 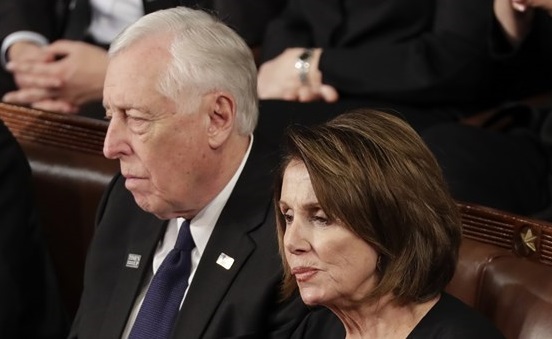 causes: black clothing (for #MeToo), kente ties and sashes (because of Trump’s Africa insult), butterfly stickers (for the “dreamers”), red buttons (for a victim of racial crime) and the more bipartisan purple ribbons (for the opioid epidemic).

Worse, dozens of Democrats refused to stand when the president entered the House chamber, forgetting that one stands out of respect for the office, not the officeholder. Rep. Bennie Thompson (D-Miss.) grabbed a middle-aisle seat only to turn his back on the president when he walked past. Democrats groaned, scoffed, heckled and made lemon-biting faces. Others simply boycotted. In short, they did the same sort of things they (and I) denounced Republican lawmakers for when they did them to President Barack Obama.

Nancy Pelosi looked like she was biting on a lemon as she appeared to be rolling it around inside her constantly moving mouth.

That there were no fewer than five Democratic speeches in response to the State of the Union only compounded the confusion.