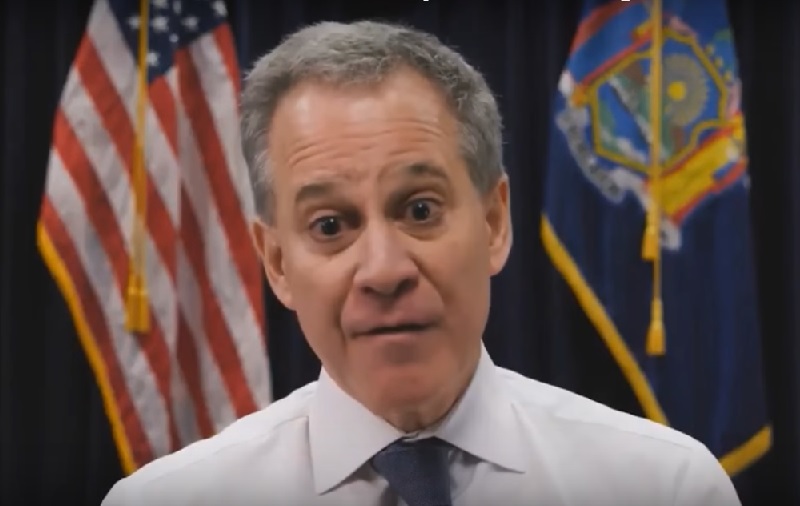 The New York Times published a glowing paean to the New York Attorney General, Eric Schneiderman, today. The reason for such hype is that Schneiderman is completely obsessed with going after President Donald Trump to the extent that we have reached a new milestone. He has taken 100, count them, 100 legal or administrative actions against the Trump administration and those evil congressional Republicans.

The ironic thing is that reporters Danny Hakim and William K. Rashbaum in their idolization of Schneiderman also revealed his obsession is so overboard that the real duties of that state's attorney general are pretty much of a sideshow in New York’s Attorney General in Battle With Trump:

By moving to sue the Federal Communications Commission over net neutrality this month, his office took its 100th legal or administrative action against the Trump administration and congressional Republicans. His lawyers have challenged Mr. Trump’s first, second and third travel bans...

And how did that work out? For that answer we can consult the December 4 New York Times which conveniently omitted Schneiderman's wasted effort: Supreme Court Allows Trump Travel Ban to Take Effect.

So what priority does Schneiderman place upon the normal non-Trump-obsessed duties of a state attorney general?

“We try and protect New Yorkers from those who would do them harm,” Mr. Schneiderman said during a recent interview in his Manhattan office. “The biggest threat to New Yorkers right now is the federal government, so we’re responding to it.”

Well, there is your answer. Trump obsession takes top priority according to the New York attorney general. In fact, the New York Times proudly hails him as a leader of the "resistance."

In Mr. Schneiderman’s seventh year as attorney general, the office has been transformed into a bulwark of resistance amid an unusually expansive level of confrontation with the federal government.

But despite Schneiderman's extreme hostility towards Trump, isn't he enough of a professional to handle the duties of his office in a non-partisan way? The answer is most definitely no. Here was his attitude on the notorious Clinton Foundation in October 2016 as recorded by Politico:Schneiderman: 'Unfair' to single out Clinton Foundation for foreign donations.

Schneiderman said concerns about the Clinton Foundation's fundraising did not rise to the level of an investigation.

He said compliance issues with the Clintons’ foundation amounted to “ministerial, routines stuff” such as late filings or missing paperwork, and that the foundation “is properly registered and properly filed,” unlike Trump’s foundation.

Scheiderman as well as his staff do not even make an effort to at least try to pretend to be non-partisan in his office. The February 3 Politico magazine sets the scene of what happened in his office right after the surprise 2016 election:

Then came November 8. Schneiderman had spent the evening at various VIP suites at the Hillary Clinton election night party, when it started becoming clear that his tormentor was not only not returning as a constituent, but was about to become the leader of the free world. A Democratic official turned to one of Schneiderman’s aides and said: “I guess it’s going to be up to you guys now.”

Translation: We couldn't stop Trump via the ballot so now it is up to partisan investigators ("you guys") to go after him.

The next morning, as the office’s lawyers stumbled into work in a fog of exhaustion and worry, Schneiderman called a meeting. In the room were his senior staff and some of the bureau chiefs. There were tears. There were lawyers who couldn’t believe that Donald Trump—Donald Trump!—was about to become the next president of the United States. Schneiderman urged calm. Don’t just rush out and do. Take a deep breath, he told them. Let the moment wash over you. We can’t do everything at once, so prioritize. We are going to have to do more—not with less, necessarily, but with no greater resources.

This was also verified in today's Times paean:

The day after Mr. Trump’s victory, Mr. Schneiderman convened his staff in Manhattan and began the process of reorienting the mission of the office.

“The election was so traumatizing that my first step was to try and, essentially, pick everyone up off the canvas,” he said. “I had people who were too depressed to go into work.”

His staff soon began compiling something of a virtual war room, a Trump database to track federal actions and plan their responses. In some areas, Mr. Schneiderman said, they were “filling in” as the federal government rolled back enforcement of civil rights protections, wage rules and consumer protections.

God (or Gaia) bless him! Schneiderman has used partisan hackery and war room politics as a weapon for the resistance!

Okay, it is pretty clear that Scheiderman is a partisan political hack obsessed in bringing down Trump, but the Times tries with comic effect to place him on a higher moral plane due to yoga and diet:

Certainly, Mr. Schneiderman and Mr. Trump have little in common. Mr. Trump watches a lot of TV and craves his McDonalds. Mr. Schneiderman does yoga. “Other than sports, I really don’t watch TV much anymore,” Mr. Schneiderman said, and paused to think about the last time he had eaten a fast food burger. “That’s a long time ago.”

Yes, perhaps Scheiderman is a highly partisan political hack but, dammit, he does yoga and avoids fast food. That absolves all sin.

Oh yeah, Schneiderman does some regular attorney general stuff but the Times emphasizes what is truly important:

Mr. Schneiderman’s office continues to undertake prosaic work, such as a recent settlement with an upstate landlord who returned $43,000 worth of security deposits. There are weightier matters as well; a special investigations unit has been in which unarmed New Yorkers were killed by the police, a process that led to the recent indictment of an upstate district attorney on a perjury charge.

Yawn! Very nice but we know what is uppermost in Schneiderman's mind. Go for it, New York Times!

But the Trump administration remains a central focus.

Absolutely! And thanks for revealing the state Attorney General's top priority over all else.