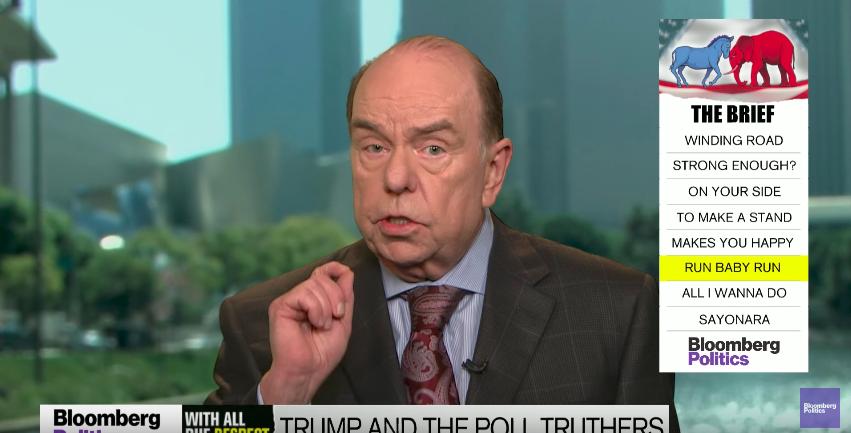 With the appointment of Anthony Scaramucci on July 21 as White House Communications Director, this is a good time to take a walk down memory lane with him to exactly two weeks before the November election when he was subjected to a searing attack by always wrong political consultant Bob Shrum on Bloomberg's With All Due Respect. Starting at the 3:50 mark of the following video, Scaramucci commits a Thought Crime by daring to suggest that "Trump Shaming" might be skewing the polls against him. Shrum responds by shaming Scaramucci as "idiotic" for daring to make such a suggestion.

Hey, that's why it is called the "Shrum Curse."

ANTHONY SCARAMUCCI: In a year like this, would the two of you say that there couldn't be the possibility of an upset? Would the two of you say that if it was 52 to 48 for Brexit and it turned around and it was 52 to 48 to leave the economic union? That did happen in this year.  And so what happens in our society right now because of the media bias is a tremendous amount of Trump shaming going on.  I've lost friends over being a supporter of Donald Trump. There is a demonization and a caricature of the man that isn't true.

Okay, stand by now for a heavy dose of Trump Shaming by Shrum followed by a whole bunch of laughably wrong predictions. Of course, all predictions by Shrum are inevitably wrong.

BOB SHRUM: No, and for someone as smart as Anthony to suggest that somehow or other the polls are rigged because of oversampling is idiotic and shows a misunderstanding of what happens....

We have the public polls converging towards a seven, eight, nine point Hillary Clinton lead. Twelve points today in the Democracy core. Twelve points in the Washington Post/ABC poll. And when you look at individual states, Pennsylvania is gone. Most of the industrial Midwest is gone. Georgia and Arizona are competitive. Hillary Clinton may be ahead there...

Right, Bob. Pennsylvania is GONE! Most of the industrial Midwest? GONE! And Hillary may actually be ahead in Georgia and Arizona...at least until the actual results came in on Election Night.

You would figure that someone with the Shrum Curse track record would hide in shame from appearing in public again. If that is what you thought you would be wrong. In fact, Shrum will be featured as a speaker and panelist at the Politicon convention in Pasadena, CA where he is scheduled to be on a panel on the Art Of The Campaign Strategy, July 29. The next day, Shrum will be dooming the political career of Congressman Joaquin Castro with his infallible curse at an event billed as Castro Conversation:

Join brilliant tactician, speech writer, and top strategist of numerous presidential campaigns_______, as he finds out if Rep. Joaquin Castro of Texas might be the candidate to redeem the Democrats and lead the party back to power.

With all the panels and discussions at Politicon why is the most obvious topic being avoided? Is the Shrum Curse Real?

Your humble correspondent will award an oatmeal cookie to the first intrepid reporter who dares to broach this subject with Bob Shrum. You hear me, Jake Tapper? Jake? Jake?