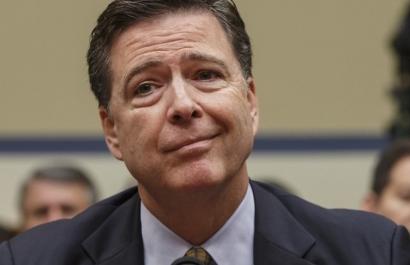 It was pretty much inevitable. Once you propose the theme of James Comey as a sexual harassment victim as happened in the New York Times, it was almost certain that the next step would be a comparison of him to Anita Hill. And it sure didn't take long. The June 9 Washington Post, followed a day later by the Los Angeles Times, have already gone with that comparison.

The Washington Post article by Christine Emba takes a rather embarrassing stab at Comey's manhood in its title, Mr. Comey, what were you wearing that night?

Just as in many of the most public sexual-assault proceedings — think Anita Hill’s testimony against Clarence Thomas, or even the Bill Cosby trial underway in suburban Philadelphia — we have an alleged perpetrator with an established power structure at his disposal and an accuser who is asked to explain why he didn’t do more to stop things from happening. And Comey’s answers mimic the confusion and guilt that often mark victims’ responses to such situations. “I was so uneasy.” “I was so stunned.” “Maybe if I did it again, I would do better.”

The Los Angeles Times story by Robin Acarian also pictures Comey as harassed starting with its title, The James Comey Method of dealing with a bad boss offers lessons for all harassed workers.

And then, when Comey appeared Thursday before the Senate Intelligence Committee, he was treated in a way that was reminiscent of how the Senate Judiciary Committee treated Anita Hill so many years ago, when she alleged sexual harassment by Supreme Court nominee Clarence Thomas.

So where could the silly Comey comparisons go next? Robin Acarian seems to have left us a clue:

So, he memorialized each conversation with the president on a laptop. He confided in his lieutenants. And he made sure that his version of events would be disseminated at a time convenient for Comey — say, after the president threatened him with the existence of recordings of their conversation, or upon the appointment of a special prosecutor, or perhaps during a Senate hearing.

...I’m not saying the Comey Method can work for everyone who has been mistreated in the workplace, or harassed or asked to do something unethical, but it provides a valuable template for fighting back with style.

Take notes, tell friends, and then, when the moment is right, unleash your stinger.

Got that? Keep a record of your encounter with the president in case you need evidence against him in the future. Does that not sound like the blue dress with the unique "presidue" DNA on it that Monica Lewinsky saved as a memento of her Bill Clinton Oval Office unleashed stinger encounters? Comey probably doesn't own a blue dress but there is that blue White House curtain he tried to blend into so as not to be noticed by his imaginary Predator-In-Chief. Perhaps those blue curtains should be checked for DNA evidence.

However, since Monica Lewinsky was a victim of a predatory Democrat, the mainstream media would be highly reluctant to portray Comey as Monica so don't expect that comparison anytime soon. So much safer for them to just stick with the Anita Hill comparisons.