"The trip began a day before the election, and Mr. Kerry had confidently predicted a Hillary Clinton victory."

Ah! It was the best of times, it was the best of times. Not a hint that anything could possibly ruin the upbeat mood of what was essentially an Election Day victory lap by Secretary of State John Kerry and his merry band of liberals to the bottom of the world. Fortunately, for the eternal amusement of posterity, New York Times science reporter Justin Gillis was on hand to record the tragicomic scene. First let us begin as he notes the jubilant visitors touring Antarctica avant le déluge orange:

SCOTT BASE, Antarctica — A group of hikers in red parkas approached a half-dozen seals resting on floating sea ice. The leader of the entourage — Secretary of State John Kerry raised his arms and ordered everyone to halt.

As an ethereal silence descended, Mr. Kerry cocked his head in the stillness of one of the world’s last truly wild places. 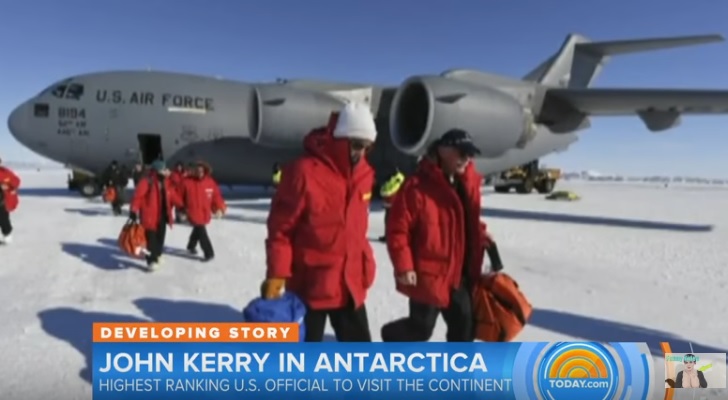 And what trip to Antarctica could be complete without an encounter with a cute penguin?

Mr. Kerry was also fascinated by Antarctic wildlife. On his first day, flying by helicopter to see the spectacular geology of an ice-free region called the McMurdo Dry Valleys, his group was accosted by a lone Adélie penguin. The secretary of state whipped out his phone and filmed the creature.

“Come on, walk up here, buddy!” Mr. Kerry said. The penguin hesitated, then did exactly that.

Yes, it was good. All good. But then on the trip back unthinkable ugly reality from the rest of the world brutally intruded upon the shocked passengers on the flight:

Mr. Kerry and the aides traveling with him to Antarctica, many of them young liberal Democrats, were not expecting Mr. Trump to win. The trip began a day before the election, and Mr. Kerry had confidently predicted a Hillary Clinton victory.

He was flying over the South Pacific toward New Zealand the next day when the results began to come in. His aides rushed around the plane, shocked at some of the states Mrs. Clinton was losing.

The results were not definitive until he was in his hotel room that night in Christchurch. In an interview the next evening, and in a series of chats on the trip, Mr. Kerry trod carefully, declining to offer any direct criticism of Mr. Trump.

He and his aides plan to welcome the Trump appointees who will soon run the State Department, hoping to build relationships with them and, possibly, persuade them to keep some of Mr. Kerry’s diplomatic deals.

You must bid welcome to your new Neanderthal overlords as they tear up those wonderful Kerry treaties strictly enforced despite bypassing silly Senate ratification.

If only John Kerry had taken a Penguin-English dictionary with him to Antarctica, he would have realized that the cute upright bird he met was telling him to "Make Antarctica Great Again!"