Nutty Professor Pleads for Extinction of All Carnivorous Animals 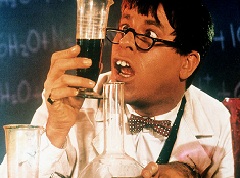 Better enjoy the Lion King while you can. Flipper could also be gone soon. If a certain nutty professor has his way, all lions, dolphins, as well as all other carnivorous animals on this planet would be selected for controlled extinction for the "high crime" of eating meat and causing suffering in other animals. I kid you not.

In a long, rambling, seemingly endless opinion piece in the New York Times that comes off like a bizarre mixture of Dr. Strangelove and Professor Irwin Corey, Rutgers philosophy professor Jeff McMahan makes the case for playing God in the animal kingdom because of his assertion that God was flawed for allowing animal suffering in the wild:

Viewed from a distance, the natural world often presents a vista of sublime, majestic placidity. Yet beneath the foliage and hidden from the distant eye, a vast, unceasing slaughter rages. Wherever there is animal life, predators are stalking, chasing, capturing, killing, and devouring their prey. Agonized suffering and violent death are ubiquitous and continuous...

...Suppose that we could arrange the gradual extinction of carnivorous species, replacing them with new herbivorous ones.  Or suppose that we could intervene genetically, so that currently carnivorous species would gradually evolve into herbivorous ones, thereby fulfilling Isaiah’s prophecy.  If we could bring about the end of predation by one or the other of these means at little cost to ourselves, ought we to do it?

For the nutty professor from Rutgers, the answer to the latter question would be "yes."

The big question your humble correspondent has is why the New York Times allowed this insanity to be published in their newspaper. The only answer I could come up with is that an editor at the Times must hate Professor McMahan so much that he decided to allow the Nutty Professor to unwittingly subject himself to public humiliation and ridicule. For another example of professorial nuttiness, check out this assertion from McMahan that we must play God...in order to correct God's "flaw" in allowing innocent animals to suffer from the attacks of carnivorous species:

The continuous, incalculable suffering of animals is also an important though largely neglected element in the traditional theological “problem of evil” ─ the problem of reconciling the existence of evil with the existence of a benevolent, omnipotent god. The suffering of animals is particularly challenging because it is not amenable to the familiar palliative explanations of human suffering. Animals are assumed not to have free will and thus to be unable either to choose evil or deserve to suffer it. Neither are they assumed to have immortal souls; hence there can be no expectation that they will be compensated for their suffering in a celestial afterlife. Nor do they appear to be conspicuously elevated or ennobled by the final suffering they endure in a predator’s jaws. Theologians have had enough trouble explaining to their human flocks why a loving god permits them to suffer; but their labors will not be over even if they are finally able to justify the ways of God to man. For God must answer to animals as well.

And here is the Nutty Professor fantasizing about playing God:

McMahan concludes his voluminous piece with a final fit of supreme nuttiness:

Here, then, is where matters stand thus far.  It would be good to prevent the vast suffering and countless violent deaths caused by predation.  There is therefore one reason to think that it would be instrumentally good if  predatory animal species were to become extinct and be replaced by new herbivorous species, provided that this could occur without ecological upheaval involving more harm than would be prevented by the end of predation.  The claim that existing animal species are sacred or irreplaceable is subverted by the moral irrelevance of the criteria for individuating animal species.  I am therefore inclined to embrace the heretical conclusion that we have reason to desire the extinction of all carnivorous species, and I await the usual fate of heretics when this article is opened to comment.

Trust me, no animal in the wild has ever suffered as much as I did by reading Professor McMahan's insanity in its entirety. So would that give me the right to call for the extinction of a certain Nutty Professor?