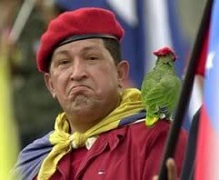 The Venezuelan people are forced to suffer through a marathon of Hugo Chavez appearances on their own television sets. Anything less than total adoration of the weekly host of "Aló Presidente" is severely punished. So with all this unwanted overexposure to the overbearing El Jefe, is it any wonder that Venezuelans are somewhat less than enthusiastic about shelling out their money to watch yet more homage paid to Chavez by filmmaker Oliver Stone in the form of his documentary, South of the Border? As Variety reports, the latest Stone film has turned into a complete bomb in Chavez's own economically troubled country:

Despite a PR and marketing blitz that had Oliver Stone on a whirlwind tour of Latin America, his latest documentary "South of the Border" has sunk like a rock at the Venezuelan box office.

Local observers in Venezuela have reported empty cinemas, indicating a stunning indifference to Stone's pic, a documentary about South American leaders that devotes a hefty amount of screen time to the country's President Hugo Chavez. In the 12 days after its June 4 debut, it grossed only $18,601 on 20 screens, according to Global Rentrak. Showings on mobile screens in rural areas (where Chavez has more popular support) have attracted crowds, but these screenings are free.

Besides the fact that the Venezuelans are bored with the constant appearances of Chavez on television, Stone's documentary also bombed because it just flat out stinks according to this Variety review:

Venezuelan President Hugo Chavez is the jocular knight of grassroots democracy in Oliver Stone's paean to Latin American leftism, South of the Border. A predictable compendium of Fox News clips on one side and peasants glad-handing their leaders on the other, the docu offers little genuine information and no investigative research, adopting a style even more polemical than Stone's earlier docus on Fidel Castro and Yasser Arafat.

Although "South of the Border" can be expected to receive an enthusiastic response from the Ivy League Chavistas when it opens in the USA in a few days, it will be no surprise if it bombs as badly, or worse, than Oliver Stone's "W."

And now much longer can Stone continue to receive funding for producing a string of leftwing propaganda flops?