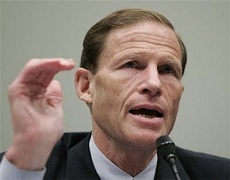 David Brooks seemed to be having a coherency challenged moment during his latest scheduled conversation with fellow New York Times columnist, Gail Collins. First Brooks excused what Connecticut senatorial candidate Richard Blumenthal falsely claimed about being a Vietnam combat veteran as an "accident":

As for Blumenthal, my guess is he survives his little brush with mendacity. The Connecticut Democrat accidentally said he was a combat veteran, when in fact he never served in Vietnam. Could happen to anyone!

A moment later, Brooks reversed course and admitted that Blumenthal lied but, eh, no big deal:

The claim is dishonorable, but everybody expects politicians to lie. One of the odd perplexities of an angry moment is that expectations are so low, politicians end up surviving scandals that would kill them in happier times.

So which is it, David? An accident or a lie? It all depends upon which of Brooks' sentences in the same paragraph you are reading.

This was one of those rare occasions when the normally irrational Gail Collins actually sounded more coherent than Brooks. She had an accurate and funny description of Senator Arlen Specter that made your humble correspondent chuckle:

And Arlen Specter! The Democrats in Pennsylvania were being asked to nominate an egomaniacal, opportunistic, 80-year-old, five-term incumbent who was a Republican until about three minutes ago, and made it very clear he had switched sides only because he thought it would be easier to get renominated as a Democrat. I know they’ve disappointed Joe Biden and Gov. Ed Rendell by picking Joe Sestak, the younger, cuter, always-Democrat Congressman who’s a former admiral, but gee …

Treasure this conversation, Gail. You finally made more sense than David Brooks who was both absurd and contradictory in the same paragraph.