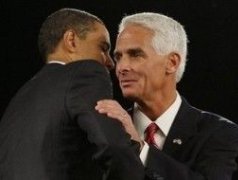 Whenever Time magazine praises a Republican, you can almost always be sure it is because of an ulterior motive. And, sure enough, the motive for Time magazine to praise Florida Republican governor Charlie Crist is to slam his much more conservative senate primary opponent, former state House speaker Marco Rubio. Note the sympathy for Crist in this Time story by Tim Padgett coupled with criticism of Rubio:

Ever since a conservative tent revival began sweeping America last summer, sparked by angry misgivings about health care reform and other harbingers of big government, Republican purists have targeted Crist's moderate, bipartisan style. Seizing on his embrace of President Obama's $787 billion economic-stimulus plan, they've treated him as a whipping boy...

...Along the way they've anointed Rubio, a 38-year-old Cuban American, as the right wing's new boy wonder, a genuinely conservative David who can slay Crist's Goliath RINO (Republican in Name Only) in the primary next August.

"Right wing?" Using terminology such as that, guess where Time writer Padgett's political bias is coming from.

And it's just the latest warning that if Crist hopes to take his less strident and more inclusive brand of Republicanism to Washington — an approach, shared by California Governor Arnold Schwarzenegger, that many thought the GOP should adopt after last year's disastrous election losses — he has to reckon first with the Bush brand.

"Inclusive" being the liberal buzz word meaning they want the GOP to become more liberal.
Of course, no mention in the Time article about Crist's close association with the accused mini-Madoff ponzi criminal currently awaiting trial, Scott Rothstein, from whom he received substantial campaign donations. Judging from the photo below of Crist at Rothstein's wedding, the latter should have been incarcerated not only for his extensive South Florida ponzi schemes but for exhibiting criminally poor sartorial taste by dressing like a wannabee tropical Soprano. 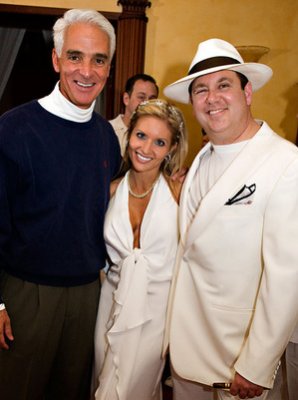