We know that NBC loves to lob softball questions at First Lady Michelle Obama when interviewing her, and apparently they also enjoy it when others do the same. On Saturday’s Today show, co-anchor Lester Holt brought on Nene Sy, a high school girl who recently interviewed the First Lady.

Holt hyped the story, calling Sy, “the young woman who was recently handed a very big assignment –  a chance to interview First Lady Michelle Obama.” That’s right, Sy did not seek out this opportunity. She was chosen to do it because Mrs. Obama wanted to be interviewed by someone who, like her, was the first in her family to go to college.


Of course, this was destined to be a puffy interview from the start, given that the interviewer was a high school girl from East Harlem who had never interviewed anyone before. Holt played a clip of one “very personal question” from the sit-down – Sy asked Mrs. Obama if she had any advice for a fellow first-generation college student. After playing the first lady’s uplifting answer, Holt remarked to Sy, “Very great advice. I mean, she was looking right at you. What was that like?”

It's impressive that Mrs. Obama looked someone in the eye? Sy commented on the advice the First Lady gave her, and then Holt touted some more of that instruction: “She also told you to accept failure, and that's a notion we don't like to talk about. We always say, you can do whatever you want, but did you think about that after she said it?” 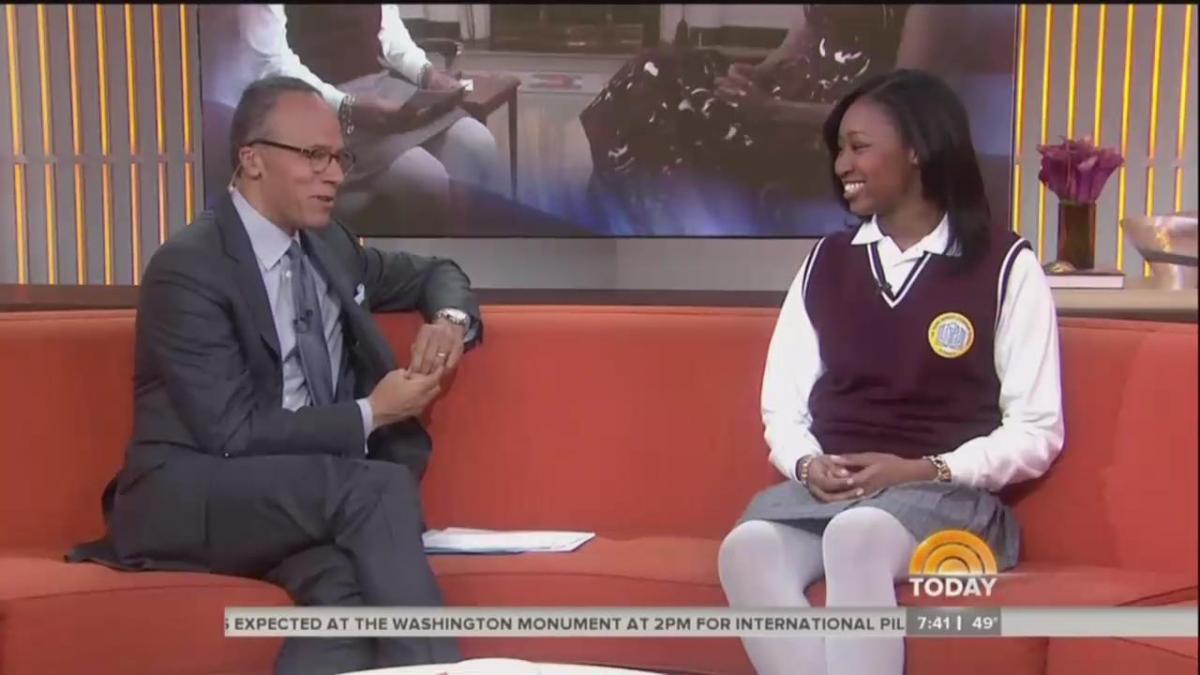 This whole segment seemed like just another way for NBC to promote the brilliance of Michelle Obama.

LESTER HOLT: Back now on a Saturday morning with the young woman who was recently handed a very big assignment –  a chance to interview first lady Michelle Obama. Luckily, 18-year-old Nene Sy was up for the task. Nene is a senior at the Young Women’s Leadership School of East Harlem and her interview is going to be shown at the fifth annual Women in the World summit this morning here in New York City. Nene, good morning. Great to see you.

NENE SY: Great to see you, too.

HOLT: This opportunity was extended, because I understand the first lady wanted to talk or wanted to be interviewed by someone who, like her, was the first in their family to go to college.

HOLT: How did  -- I understand it was quite secretive, the selection process. How did you find out about this?

SY: Well, it was the day of my birthday. My principal came up to me, and she was like, Nene, I need you in my office. And she told me, I cannot tell you what it's for, but you will have an interview today. So I had an interview with another young lady that was in the 11th grade. And then the next day, she called my house and she said, Nene, you were chosen to interview Michelle Obama. And I couldn't believe it. I was –

HOLT: And you had just a couple weeks to prepare.

HOLT: And did you -- any idea what you wanted to ask her the start?

SY: Yeah, I knew it was about education, so I watched a bunch of her videos, I got my questions from what I saw, and that was it.

HOLT: You had at one point a very personal question for her. I'd like to play it, if we could, and then we'll talk. Here it is.

SY: First-generation college student, like I am. Do you have any advice for me?

HOLT: Very great advice. I mean, she was looking right at you. What was that like?

SY: It was great, because that was something I struggled with, and she told me how you use your doubt to strengthen yourself and you use the doubt you get from others to build fuel and to push yourself forward. So, that's something that I will be taking with me to college.

HOLT: She also told you to accept failure, and that's a notion we don't like to talk about. We always say, you can do whatever you want, but did you think about that after she said it?

SY: Yeah, I feel like she meant that. When you fail, don’t – that's not the end. You should get up, pick your feet back up and do –  try harder than you tried before.

HOLT: Very cool. And you're going -- at the summit later on, I know they're going to show some of this interview and Barbara Walters is going to interview you. Quite a big deal. Congratulations.