MSNBC: North Carolina Is Lab Where GOP Has ‘Perfected Its Frankenstein Monster’

Former DNC press secretary Karen Finney continues to use her MSNBC show to brazenly fly her partisan flag. On Sunday’s Disrupt with Karen Finney, the half-black host slammed North Carolina as a state that showcases the Republican “agenda on steroids.” One of her guests went further, dubbing North Carolina “the laboratory where the GOP has perfected its Frankenstein monster.”

Finney began the segment by telegraphing her feelings about Republican policies in general: “While the national Republican Party is in disarray and discord, at the state level Republican leaders have been frighteningly well-organized enacting so-called reforms.” Apparently Finney is frightened by effective Republican governance. MSNBC pundits often gripe that the national GOP says no to everything and refuses to govern. But when Republicans govern by enacting their policies, they frighten Karen Finney. She also dismissed GOP reforms as “so-called reforms” because, as we all know, only liberal  Democrats make real reforms.


Finney then struck an ominous tone: “One state, North Carolina, offers a cautionary tale of the full impact of Republican rule.” What followed was a diatribe against the state government’s accomplishments since Republicans took control of both houses of the legislature in 2010. These included banning same-sex marriage, limiting abortion access, instituting a voter ID law, and passing a tax reform plan that “increases taxes on the poor and gives a tax cut to those making nearly $1 million” – in other words, changing from a tiered personal income tax structure to a flat tax which treats citizens equally rather than punish earners of higher incomes.

Finney pointed out that the latter three developments came after Republican Pat McCrory was elected governor in 2012, a development which “allowed the GOP to really pack on the pain.” On top of it all, Finney complained, the General Assembly redrew the state’s congressional district lines – something that happens every 10 years in most states –  to ensure that voters “would have an uphill battle trying to undo the damage done.” 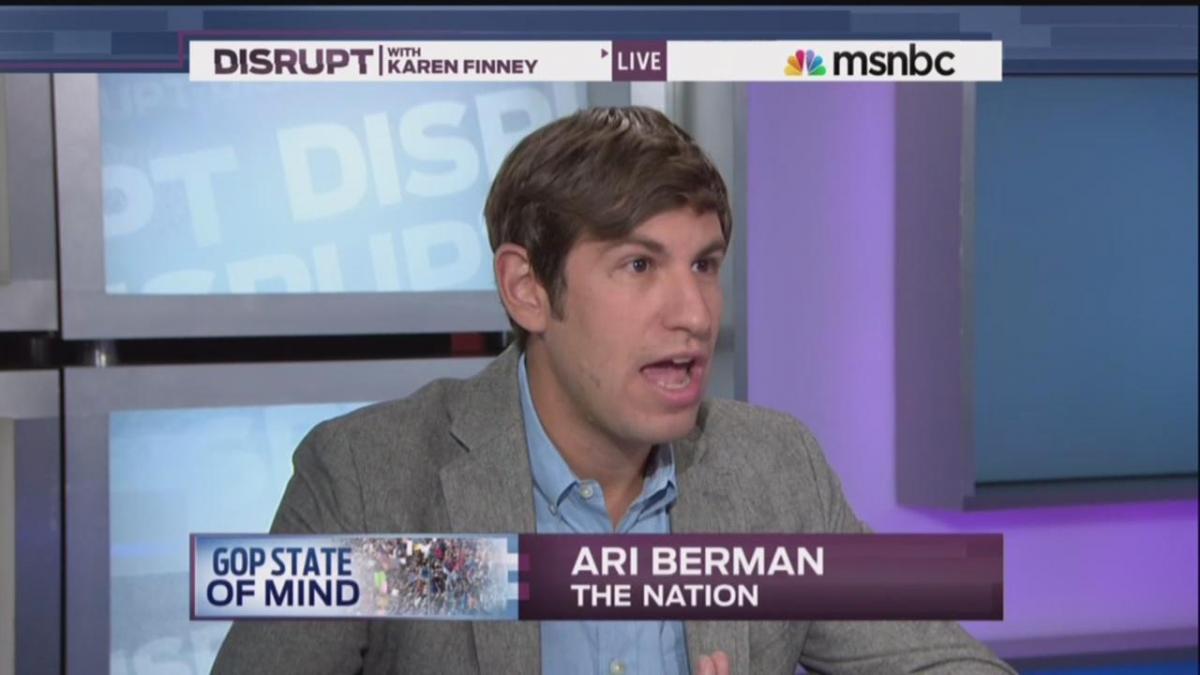 At the end of her horror story, Finney huffed, “North Carolina [is] not the only state controlled by Republicans, but it is a state where I think we see kind of their agenda on steroids.” Finney’s guest, Ari Berman of The Nation, joined the conversation and invoked a classic horror story: “North Carolina really is the laboratory where the GOP has perfected its Frankenstein monster. I mean, they’ve done so many bad things there and the voting law is really just the cherry on top of the disgusting cake, I guess you could say, that they’ve built.”

A little bit later, Finney rattled off some more conservative accomplishments of the North Carolina legislature – among them, welfare reform and a proposed ban on Sharia law – and agreed with Berman’s metaphor: “This is the GOP Frankenstein monster basically, as Ari says, isn’t it?” [By the way, shouldn't liberals who believe in separation of church and state applaud, not condemn, laws that expressly forbid religious law from being consulted in state court proceedings?]

Throughout this whole discussion, Finney and her guests never really explained how all of these right-wing policies were hurting North Carolina. All they offered was that Governor McCrory’s approval rating has slipped to 39 percent, which by itself is not necessarily a reason for him to change course. The rest of their complaints came down to ideology: the liberals at MSNBC could not stand the existence of a state governed by conservative Republicans. Finney and others on the Lean Forward network want us to believe that GOP policies will only cause doom and gloom when and where they are enacted. It’s just too bad that Finney’s show airs at a time when most people are out running errands or enjoying the summer weather rather than sitting in front of their TVs and listening to her doomsday rhetoric.

Below is a partial transcript of the segment:

KAREN FINNEY: While the national Republican Party is in disarray and discord, at the state level Republican leaders have been frighteningly well-organized enacting so-called reforms. One state, North Carolina, offers a cautionary tale of the full impact of Republican rule. In 2010, Republicans took a hold of both houses of the state’s general assembly, the first era of all-Republican rule since the McKinley administration. First on the GOP agenda: gerrymandering. The GOP redid the congressional map, ensuring that voters would have an uphill battle trying to undo the damage done. Next, scapegoating gay people and denying LGBT rights. In 2012 they passed an amendment banning same-sex marriage with 60 percent of the vote, making something that was already illegal even more illegal. Then, on election day 2012, Republicans not only maintained both houses in the assembly, but they also picked up their first Republican governor in more than two decades – Pat McCrory. That allowed the GOP to really pack on the pain. Just last month alone, Governor McCrory signed a tax plan that increases taxes on the poor and gives a tax cut to those making nearly $1 million. A couple of weeks later, despite a pledge to not sign any new abortion restrictions if elected, McCrory signed a restrictive law that will make it harder for women to access the legal procedure and could result in closing all but one of the state’s sixteen clinics. And this week the governor signed a sweeping voter ID bill into law on the heels of the Supreme Court striking down Section Four of the Voting Rights Act.

Joining me now to talk about it is North Carolina -- about the voter ID law and Republican rule, let's bring in Ari Berman from The Nation and Barbara Arnwine, president and executive director of the Lawyers’ Committee for Civil Rights Under the Law. Ari, thanks so much for joining me. I want to start with you. North Carolina not the only state controlled by Republicans but it is a state where I think we see kind of their agenda on steroids. As The Washington Post reported, right now 30 states have Republican governors and in all but five, the GOP also controls state legislatures and in 14 of those states, including two with Democratic governors, Republican majorities are big enough to override gubernatorial vetoes. You talk a bit about the need to get out and get organizing. Looking at that map, it sure seems what the consequences are.


ARI BERMAN: Well, absolutely. And North Carolina really is the laboratory where the GOP has perfected its Frankenstein monster. I mean they’ve done so many bad things there and the voting law is really just the cherry on top of the disgusting cake, I guess you could say, that they’ve built. Because you mentioned voter ID but it goes so far beyond that. I mean, cutting a week of early voting, eliminating same-day registration, authorizing poll watchers to challenge voters, getting rid of public financing of judicial elections, flooding the system with more unregulated corporate money. So this bill makes it so much harder to vote while at the same time putting so much more money into the political system, you look at it and on the face of it it can't be about stopping voter fraud. This is clearly just a power grab when you look at all the details.

FINNEY: You know, Barbara, thanks for joining me. I want to take a look at what North Carolina's Republican-controlled government has been up to. Time magazine reported, quote, "Since the state's legislative session began in January, lawmakers have blocked a Medicaid expansion under Obama’s Affordable Care Act, reduced access to federal unemployment benefits, cut the corporate tax rate, trimmed public education funding, passed a bill that allows concealed weapons in bars and restaurants, tackled welfare reform and proposed a ban on Sharia in addition to restricting access to abortion and new stricter voting laws.” This is the GOP Frankenstein monster basically, as Ari says, isn’t it?

BARBARA ARNWINE: Yes, it is the North Carolina nightmare. And it's a warning to the nation that this is precisely what their real agenda is, that if we aren't careful, that we will see North Carolina becoming the model for every state in this country unless those of us who care get out and vote and exercise our power. It's very important to know that the majority of North Carolinians are opposed to this poll measure and indeed 50 percent of the people no longer support these laws and in fact 56 percent of the people now disapprove of the legislature -- the general assembly, that is -- and the governor.