Andrea Mitchell: Hillary Has Done 'Such a Job by Everyone’s Account' as Secretary of State

The liberal media's lovefest for Hillary Clinton continues apace. Andrea Mitchell’s  interview with the outgoing secretary of state will air today, but don’t expect to see many tough questions. We already know what Mitchell thinks about Clinton, based on a comment she made on Tuesday’s Andrea Mitchell Reports. Talking with MSNBC political analyst Ed Rendell, Mitchell declared of Clinton, “She has done such a job by everyone’s account as secretary of state.”

Except, of course, for that little Benghazi thing, which Mitchell acknowledged is Hillary’s major regret. And it’s a pretty big blight for someone who has done “such a job.” Such a job covering up the facts, maybe? Such a job misleading the American public about the nature of the attack? [See video below. MP3 audio here.]

Rendell, who served as the Democratic Party's national chairman at the end of Bill Clinton’s term in office, lavished on the praise as well. Regarding the Benghazi failure and the administration’s rocky relationship with Israeli Prime Minister Benjamin Netanyahu, Rendell quipped, “Nobody pitches a perfect game every time out,” implying of course that Clinton acquitted herself well on the proverbial mound overall.

Although Joe Biden originally hails from the Keystone State, the former Pennsylvania governor went on to insist that the vice president and all other challengers should stand aside so as not to interfere with history. "I love Joe Biden. I think he’s done a great job. I think he may be the best vice president in my lifetime," Rendell insisted. "But you can't stand in the way of history, and history is poised for the first woman president if Hillary Clinton chooses to go down that road."

Below is a transcript of the exchange: 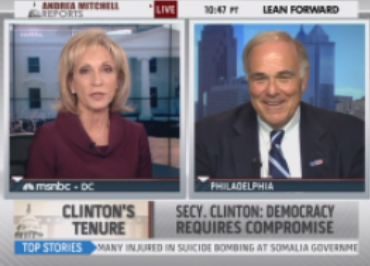 ANDREA MITCHELL: Hillary Clinton, granted, it's early to talk about 2016, but that interview, the joint interview with the president was pretty unusual. What is the signal that it sends?

ED RENDELL: Well, I think the signal is that President Obama has an incredible level of appreciation for the way that she conducted her business and the way they came together as individuals. Not just as partners, but as individuals. And I think down the road if Hillary decides to run, President Obama will be sort of the peacemaker who talks to the vice president. I love Joe Biden. I think he’s done a great job. I think he may be the best vice president in my lifetime. But you can't stand in the way of history, and history is poised for the first woman president if Hillary Clinton chooses to go down that road. So I think the president will be a key factor in looking to make that happen, just like Bill Clinton was a key factor in helping the president in ‘12 and Hillary herself after she lost in the primaries was a key factor in getting Senator Obama elected president in ‘08.

MITCHELL: She has done such a job by everyone's account as secretary of state. Yet, she today acknowledged Benghazi was a major regret. The threat assessment process didn't work according to the Independent Review Board, and there are probably regrets about the Middle East, about the direction that the administration, not Hillary Clinton, but the administration, the president took initially with Prime Minister Netanyahu which really did poison the atmosphere for peace negotiations down the road. Would you agree with that?

RENDELL: Nobody pitches a perfect game every time out. Look, Hillary Clinton, if she decides to become a candidate in 2016, Andrea, she will be judged on the totality of her work as secretary, and she was an extraordinary secretary. Not just doing the ordinary things that secretary of states have to do. She did that very well. But the town meeting she had in foreign countries, the outreach to women throughout the world was exceptional and created untold goodwill for America, and the things she did on economic development. There was a recent article outlining how powerful she was for American companies and advancing their interest. She was an extraordinary secretary of state, so if they try to attack her on Benghazi or anything like that in 2016, if she becomes a candidate, she will have a great, great record to fight back on.