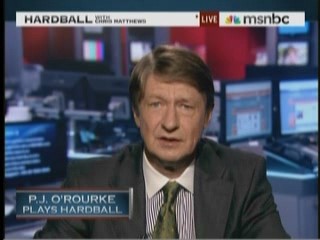 Since Bill Maher released a video of Christine O'Donnell saying evolution is a myth, the Left and their media minions have been falling all over themselves ridiculing the Republican senatorial candidate from Delaware.

Throwing some deliciously cold water on the attacks Tuesday was the Weekly Standard's P.J. O'Rourke.

Appearing on MSNBC's "Hardball," O'Rourke told the perilously liberal host after he showed O'Donnell's remark, "I`ve got some problems with evolution myself."

"I look around at, say, Democrats and I say, 'That`s evolved?'" (video follows with transcript and commentary):

CHRIS MATTHEWS, HOST: You`re the most brilliant satirist. You are the greatest satirist in the world and I don`t know you satirize the Tea Party movement, which is already by itself a satire of everything that`s going on.

MATTHEWS: Let`s look at one of your competitors. Oh, yes.

O`ROURKE: You want the people to address --

MATTHEWS: Take a look. Let`s -- here`s one of your opponents. Here`s Bill Maher going after Christine O`Donnell. I want you to add to something, the icing to this cake.

CHRISTINE O`DONNELL (R), DELAWARE SENATE CANDIDATE: You know what? Evolution -- evolution is a myth, and even Darwin can`t spell --

BILL MAHER, TV HOST: Even is a myth?

O`DONNELL: Yes. You know what?

MAHER: Have you ever looked at a monkey?

O`DONNELL: Well, then, why aren`t they -- why aren`t monkeys still evolving into humans?

MAHER: It takes a long time.

MATTHEWS: OK. I think that`s the open question, P.J., why aren`t monkeys still evolving in front of our face. I mean, she says, if you`re looking at a monkey and it`s not turning into your little brother, then it obviously wasn`t true. That`s her point.

O`ROURKE: I`ve got some -- I`ve got some problems with evolution myself -- I mean, because I look around at, say, Democrats and I say, "That`s evolved?" You know, I would say it`s going in the other direction, you know?

Certainly what hasn't been evolved about the Left for the past two weeks since O'Donnell's surprising victory in the Delaware primaries was how so many supposedly enlightened individuals have forgotten the large percentage of truly religious people in this country that don't believe in the theory of evolution.

In the midst of all this hand-wringing about so-called Islamophobia, it does seem astonishingly hypocritical that those devoutly ascribing to Judeo-Christian principles can be readily mocked on national television by members of the press.

As O'Rourke poignantly depicted, these folks despite their arrogance are clearly going in the wrong direction.

Makes one wonder how far they are from scraping their knuckles on the ground as they walk.