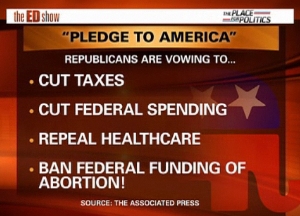 Speaking with Ohio Democrat Senator Sherrod Brown on "The Ed Show," Schultz said, "This was just released a few moments ago from the Associated Press. They're calling it the 'Pledge to America.'"

He continued, "The 'Pledge to America' is to cut taxes, cut federal spending, repeal healthcare, and ban federal funding for abortion. Nothing in there about job creation...Those are the four main points."

Actually, there are five main points in this 21-page document, the first of which is titled, "A Plan to Create Jobs, End Economic Uncertainty, and Make America More Competitive" (video of Schultz's remarks follows with transcript, commentary, and full text of the Pledge):

As you can see, Schultz claimed his source for this was the Associated Press. For the record, the first piece the AP released concerning the Pledge was published at 4:58 PM EDT, a full hour before Schultz went on the air.

It was a brief piece by Julie Hirschfeld Davis with only four paragraphs. Here are paragraphs one and three:

House Republicans are vowing to cut taxes and federal spending, repeal the health care law and ban federal funding of abortion. It's all part of a new campaign manifesto designed to propel them to victory in midterm elections Nov. 2. [...]

It emphasizes job creation and spending control, as well as changing the way Congress does business.

As you can see, Schultz got his "four main points" from the first sentence in the first paragraph.

However, once again proving how many Americans never get beyond the first paragraph, the third paragraph made it quite clear that the "Pledge" emphasizes job creation.

Got that, Ed? Can't you or anyone on your staff read beyond the first paragraph of a four paragraph article? Or was there not enough time to do that in the 62 minutes before you want on the air?

Now, if Schultz's crack staff had actually done just a little bit of homework simply using any search engine on the Internet, they could have found - as I did - that at 5:38 PM EDT, fully 22 minutes before he went on the air, CBSNews.com published the entire text of the Pledge.

Readers should be reminded that MSNBC considers itself to be a cable news network, and, therefore, should have some people available to actually uncover the facts rather than allow their hosts to completely misrepresent a breaking story.

This is especially important as the following PDF clearly shows "A Plan to Create Jobs, End Economic Uncertainty, and Make America More Competitive" is prominently addressed as the very first agenda item in the Foreword to the Pledge on page four, and then is detailed in pages six through nine:

That's some nice work there, Ed.

Your employers at MSNBC, NBC, and parent General Electric must be so proud of you and your staff.