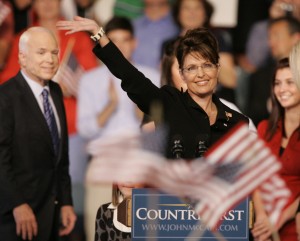 Ryan Donmoyer, a reporter for Bloomberg News who was covering the campaign, sent a quick thought that Palin's choice not to have an abortion when she unexpectedly became pregnant at age 44 would likely boost her image because it was a heartwarming story.

"Her decision to keep the Down's baby is going to be a hugely emotional story that appeals to a vast swath of America, I think," Donmoyer wrote.

Politico reporter Ben Adler, now an editor at Newsweek, replied, "but doesn't leaving sad baby without its mother while she campaigns weaken that family values argument? Or will everyone be too afraid to make that point?"

Will everyone be too afraid to make that point? This man is currently the National Editor of Newsweek.com!

Ed Kilgore, managing editor of the Democratic Strategist blog, argued that journalists and others trying to help the Obama campaign should focus on Palin's beliefs. "The criticism of her really, really needs to be ideological, not just about experience. If we concede she's a ‘maverick,' we will have done John McCain an enormous service. And let's don't concede the claim that [Hillary Clinton] supporters are likely to be very attracted to her," Kilgore said. [...]

Suzanne Nossel, chief of operations for Human Rights Watch, added a novel take: "I think it is and can be spun as a profoundly sexist pick. Women should feel umbrage at the idea that their votes can be attracted just by putting a woman, any woman, on the ticket no matter her qualifications or views."

Mother Jones's [Jonathan] Stein loved the idea. "That's excellent! If enough people - people on this list? - write that the pick is sexist, you'll have the networks debating it for days. And that negates the SINGLE thing Palin brings to the ticket," he wrote.

Another writer from Mother Jones, Nick Baumann, had this idea: "Say it with me: ‘Classic GOP Tokenism'."

Wow! If enough people on this list write that the pick is sexist, you'll have the networks debating it for days.

Getting a sense of just how much control these folks had over the news cycle?

"We're reporting that she actually supported the bridge to nowhere. First flub?" [...]

Time's Joe Klein then linked to his own piece, parts of which he acknowledged came from strategy sessions on Journolist. "Here's my attempt to incorporate the accumulated wisdom of this august list-serve community," he wrote. And indeed Klein's article contained arguments developed by his fellow Journolisters.

--Does the McCain campaign actually think that Hillary supporters will be lured to the ticket by a militant pro-lifer who also believes in the teaching of intelligent design?

--Palin exploded her state's coffers by imposing a windfall profits tax on the oil companies...sort of--no, exactly--like the proposal Barack Obama has made and John McCain has attacked. Apparently, she also supported the Bridge to Nowhere, despite her disclaimer at today's event. So how does McCain explain putting a tax-raising porker on his ticket?

This kind of coordinated attack by journalists should really be offensive to folks on both sides of the aisle.

The need for an independent press is essential to our democracy. That so many members of the media took ideas from one another as to how to sabotage a politician is disgraceful.

As Rush Limbaugh wrote me yesterday:

These people and their tactics are not new, we've seen them before in other countries and other times. They want to destroy contrary and opposition voices and views. They will climb over the law and the people to achieve their aims...They are all the same. They are leftists, disguised as lawyers, judges, scholars, professors, teachers, reporters, anchors, senators, representatives, legislative aids, congressional staff, federal bureaucrats, etc. There is NO Media. We know that now. There is just an incestuous relationship among all these various groups and a revolving door connecting them all.

In the last few days thanks to the Daily Caller, we have learned that the folks on this list acted to bury the Jeremiah Wright story in the spring of 2008, plotted to destroy Palin that fall, and then celebrated when their candidate Barack Obama won the election.

Think there really is a free and independent press anymore?