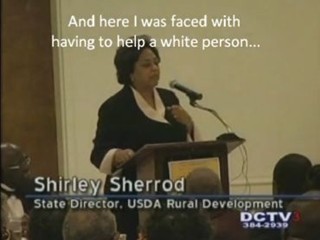 The USDA employee that was forced to resign Monday as a result of racist comments she made at an NAACP gathering in March has blamed Fox News and the Tea Party for her inability to convince her employers of her innocence.

As NewsBusters reported Tuesday, Shirley Sherrod, the USDA's Rural Development director for the state of Georgia, delivered a racism-laden address at the NAACP's 20th Annual Freedom Fund Banquet back on March 27.

On CNN's "American Morning" Tuesday, after Sherrod said that the video published by Big Government didn't accurately depict what really happened, host John Roberts asked, "When the U.S. Department of Agriculture came to you and said you have to step down, why didn't you just say, wait a minute, you don't know the full story?"

Sherrod amazingly answered, "I did say that, but they, for some reason, the stuff that Fox and the Tea Party does is scaring the administration" (video follows with transcript and commentary):

JOHN ROBERTS: Just a little while ago, we're telling you the story of Shirley Sherrod, the U.S. Department of Agriculture official from Georgia who resigned after charges that she made racist comments before the NAACP because she said she wouldn't help a farmer because he was white. That was one side of the story. We got the other side of the story from Shirley Sherrod coming up right after the break. She says it's nothing of what people are saying it was. So, let's hear from her coming right up. Fifty minutes after the hour.

ROBERTS: The U.S. Department of Agriculture accepts the resignation of an employee after a video surfaced showing her telling an audience that she withheld assistance to a white farmer because of his race. Let's listen to what she told the NAACP.

SHIRLEY SHERROD, FMR. USDA WORKER: I was struggling with the fact that so many black people had lost their farm land. And here I was faced with having to help a white person save their land. So, I didn't give him the full force of what I could do. I did enough.

KIRAN CHETRY: Does that video tell the whole story? Joining us now on the phone from Albany, Georgia is Shirley Sherrod, herself. Thanks for being with us this morning, Shirley.

CHETRY: You say that this was part of the story and that it was part that was spliced enough to show you in a bad light, that this isn't the whole story. Will you finish for us how this ended?

SHERROD: OK. I was speaking to that group like I've done many groups, and I tell them about a time when I thought the issue was race and race only. And I tell them the story of how I've worked with a white farmer back in 1986. I was not working for the Department of Agriculture. I was working with a non-profit organization assisting farmers throughout South Georgia and the Southeast. And this farmer came to me for help. I was telling the story about how working with him helped me to see that the issue is not about race, it's about those who have versus those who do not have.

And I tell how I took him to a lawyer who I thought would help him. In the end, that lawyer didn't. In the end, I had to frantically look for a lawyer because when USDA lifted -- I'm sorry. When the court lifted the injunction against USDA in May of 1987, this white farmer was one of 13 that was foreclosed on by the state of Georgia. I had to frantically find a lawyer who would file a chapter 11 to stop the foreclosure. He couldn't -- at that time, we had up to 12.

CHETRY: Yes. But let me just get back really quickly, you said you didn't give them the full force of what you could do. You said you did enough, and then you referred to the race (ph) of the lawyer as well saying that perhaps because the lawyer was white, that he would help him. So, what did you mean by that?

SHERROD: What I meant was, I didn't know anyone else, but it thought taking -- I didn't know another lawyer at that time who was local, who knew something about chapter 12. But I thought if I took him to a white lawyer, he would definitely do all that he could to help save his farm.

ROBERTS: Miss Sherrod, let's make it clear though, that this happened 24 years ago. You eventually worked with this white farmer. You eventually became friends, you say, with the farmer and his wife.

ROBERTS: So, the question I have is, when the U.S. Department of Agriculture came to you and said you have to step down, why didn't you just say, wait a minute, you don't know the full story. Here's the full story, why should I step down?

ROBERTS: Many people at home might be thinking if you're recounting an old story, why did you succumb to pressure to step down, why didn't you fight this?

SHERROD: If I tried to fight it and didn't have any support from the U.S. Department of Agriculture, what would I do?

CHETRY: Let me ask you this. Did you talk to the NAACP about it because I just want to read from our audience what Ben Jealous, the president said. He said referring to you and this surfacing of the tape, "her actions were shameful. While she went on to explain in the story, she ultimately realized her mistake as well as the common predicament of working people of all races. She gave no indication she'd attempted to right the wrong she had done to this man. And the reaction from many in the audience is disturbing."

This is from Ben Jealous. Did you try to clarify with the NAACP your story?

SHERROD: No, I haven't had had a chance to talk to anyone. All of this was happening so fast. And it's unfortunate that the NAACP would make a statement without even checking to see what happened. This was 24 years ago, and I'm telling a story to try to unite people with that now.

ROBERTS: Certainly, you're coming out and telling your story now takes it to a different level, and obviously, we're going to keep following this. It's good to get your side of it.

Sherri Sherrod, former Agriculture Department official. Thanks for joining us this morning. And perhaps, we can get you back on again, get your face on TV as well and talk to you more about this as the story continues to develop.

ROBERTS: All right. Thanks so much.

CHETRY: Thanks a lot.

So let's get this straight: her employers at the USDA don't believe her story and NEITHER does the NAACP. But didn't you get the sense Chetry and Roberts did and were quite sympathetic?

For the record, here's Monday's press release from the NAACP:

(BALTIMORE, MD) NAACP President and CEO Benjamin Todd Jealous issued the following statement today after learning of the resignation of Shirley Sherrod of the United States Department of Agriculture:

"Since our founding in 1909, the NAACP has been a multi-racial, multi-faith organization that-- while generally rooted in African American communities-- fights to end racial discrimination against all Americans.

We concur with US Agriculture Secretary Vilsack in accepting the resignation of Shirley Sherrod for her remarks at a local NAACP Freedom Fund banquet.

Racism is about the abuse of power. Sherrod had it in her position at USDA. According to her remarks, she mistreated a white farmer in need of assistance because of his race.

We are appalled by her actions, just as we are with abuses of power against farmers of color and female farmers.

Her actions were shameful. While she went on to explain in the story that she ultimately realized her mistake, as well as the common predicament of working people of all races, she gave no indication she had attempted to right the wrong she had done to this man.

The reaction from many in the audience is disturbing. We will be looking into the behavior of NAACP representatives at this local event and take any appropriate action.

We thank those who brought this to our national office's attention, as there are hundreds of local fundraising dinners each year.

Sherrod's behavior is even more intolerable in light of the US Department of Agriculture's well documented history of denying opportunities to African American, Latino, Asian American, and Native American farmers, as well as female farmers of all races. Currently, justice for many of these farmers is being held up by Congress. We would hope all who share our outrage at Sherrod's statements would join us in pushing for these cases to be remedied.

The NAACP will continue to advance the ideals of America and fight for freedom, justice and fairness for all Americans."

Regardless of the conclusions made by the USDA and the NAACP, is the media template going to be that Sherrod's actions took place 24 years ago, and she was wrongfully forced to resign as a result of pressure from Fox News and the Tea Party? Will Sherrod be made out as the victim by a sympathetic press?