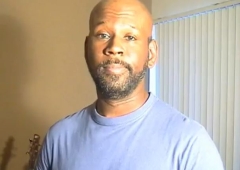 In his now infamous Friday column, Blow wrote of the Dallas Tea Party gathering he attended the previous day:

They saved the best for last, however: Alfonzo "Zo" Rachel. According to his Web site, Zo, who is black and performs skits as "Zo-bama," allowed drugs to cost him "his graduation." Before ripping into the president for unconstitutional behavior, he cautioned, "I don't have the education that our president has, so if I misinterpret some things in the founding documents I kind of have an excuse." That was the understatement of the evening.

Nowhere in [Blow's] piece are Zo's alleged misinterpretations of the founding documents described, natch. An excellent point raised in the clip by the man himself: Does anyone not think Blow set off on his Dallas adventure thinking/hoping he'd find a bunch of racist signs at the rally, only to fall back on the "minstrel show" narrative when he didn't? Surely if he'd found any he would have mentioned them as part of his unified field theory of minority conservatives cozying up to people who despise them. The silence on that point is deafening.

Indeed, and that was Laura Ingraham's point as well on Monday.