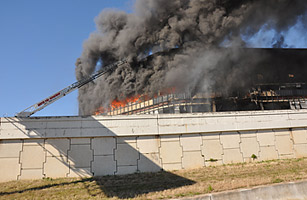 In an article about Thursday's apparent suicide by a pilot in Austin, Texas, the folks at Time.com made two seemingly intentional links to the Tea Party movement.

The long, rambling rant posted on a website eerily reflected the angry populist sentiments that have swept the country in the past year. In it, a Joe Stack inveighed against intrusive Big Brother government, corrupt corporate giants, irrational taxes, as well as the "puppet" George Bush.

Then, after the third paragraph which concluded, "Toward the end of what appears to be his final note, Stack wrote, 'Well, Mr. Big Brother IRS man, let's try something different; take my pound of flesh and sleep well,'" the folks at time advertised the following article by the magazine with a hyperlink highlighted in yellow:

(See the making of the Tea Party movement.)

Not very subtle, is it?

Let's be clear that tying this person to Tea Parties or conservatives is preposterous. After all, his suicide note ended:

You know a lot of conservatives and/or Tea Party members extolling the virtues of communism while bashing capitalism?

Shame on Time for doing this.