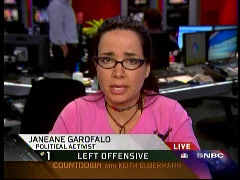 Actress and activist Janeane Garofalo had more disgusting things to say about people whose views she doesn't agree with during her radio interview with comedian Rosie O'Donnell.

On top of what NewsBusters already reported, Garofalo once again went into a rant about conservatives, this time claiming, "The Republican Party has now morphed into a National Front," the all-white British Party that is often compared to neo-Nazis.

Beyond this, Garofalo repeated her despicable assertion, "The Teabaggers, that is racism, pure and simple."

Further illustrating her questionable grasp on reality, Garofalo accused the GOP of stealing the 2000 AND 2004 presidential elections (video embedded below the fold with transcribed highlights, h/t Radio Equalizer via Story Balloon):

JANEANE GAROFALO: In the last thirty, forty years, after Watergate, after Vietnam, there was a concerted effort by the right-wing's powers that be in this country, in the military-industrial complex, to make sure that people power couldn't be as effective and that there would not be a Walter Cronkite or a Woodward and Bernstein. [...]

GAROFALO: The other face of racism has now really, really come to the fore in this country. The Republican Party has now morphed into a National Front, basically, similar to Britain's Nationalist [sic] Front. The Teabaggers, that is racism, pure and simple...If you cannot see that those so-called Teabaggers are straight-up racist, then you're not paying attention.

For those that can stand it, Radio Equalizer has more transcribed highlights.

Exit question: Do folks like Garofalo who consistently spew such hatred REALLY BELIEVE they're the tolerant ones in the society, or is this a defense mechanism to shelter their egos from the painful truth?