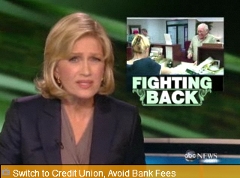 It goes without saying that what America's struggling banking industry doesn't need is for all of its depositers to withdraw their funds.

Regardless of this seemingly obvious truth, the folks at ABC and "World News with Diane Sawyer" actually did a report Friday profiling a campaign started by the far-left website the Huffington Post to get people to pull their money from the larger national banks and deposit their savings into "smaller, community-oriented financial institutions."

Although ABC's David Muir pointed out to Arianna Huffington how "a lot of people are going to look at this and say you are encouraging a run on the bank," the network along with the show's producers hypocritically ignored how they were doing precisely that by airing this report (video embedded below the fold with transcript):

DIANE SAWYER, HOST: And now, Americans mad as heck at big American banks and the ones particularly raising credit card fees while making profits. Earlier this week, David Muir took on this issue, and tonight, he's back with a grassroots movement crying enough.

The Huffington Post is a well-funded website that received a $5 million initial investment in 2006 from the venture capital firm SoftBank Capital. Calling anything it does grassroots is absurd! But I digress:

DAVID MUIR: It was Monday, our report on banks raising rates on credit cards before those new rules protecting consumers can take effect and we heard from you. One viewer e-mailed, "We bail them out and they raise rates. Priceless..." But many of you took it a step further -- "Fight the power," wrote one. Another writes, "My secret, very simple, a credit card from a credit union." And it turns out thousands of Americans are doing the same thing, trading their banks on Wall Street for the ones on Main Street.

UNIDENTIFIED WOMAN: And I'm here at Bank of America to close my account.

MUIR: This woman even documented the move on YouTube after her credit card rate jumped 27%.

UNIDENTIFIED WOMAN: Basically just closed out both of my accounts, gave me some money, and now I'm on my way. Weird.

(BEGIN VIDEOTAPE FROM "IT'S A WONDERFUL LIFE")

ERNIE THE CABBIE: Don't look now, but there's something going on over that at the bank, George.

MUIR: Even posting a film with clips of Jimmy Stewart's iconic small-town banker George Bailey. Arianna Huffington told me, put in your zip code and they'll find you a hometown bank.

ARIANNA HUFFINGTON: The response has been dramatic. Over half of the zip codes in the country have already been searched.

MUIR: 81% of the banks that failed last year were these smaller community banks.

HUFFINGTON: The only banks that come up when you put in your zip code are solvent secure banks.

MUIR: Arianna, you know that a lot of people are going to look at this and say you are encouraging a run on the bank.

Exactly, David. So why didn't you and your bosses realize the hypocrisy in making such a statement in a report that made your concerns moot?

HUFFINGTON: I'm convinced that when the big banks see real competition from the community banks and credit unions, they will change their behavior.

This would have been a nice time for Muir to say that such change could come after an organized run on these banks forced more financial insolvencies, layoffs, and further damage to an already teetering economy.

Unfortunately, this was lost on Muir and his producers who instead continued promoting the campaign:

MUIR: In fact, there's a fast-growing Facebook group dedicated to this. April Schiller switched. "How amazing," she writes "to actually talk to humans who remember me." So we went to find her at her new hometown bank.

APRIL SCHILLER: I received thank yous, I got a hand-signed Christmas card from them which I was really impressed with. It was great.

SAWYER: So David, how many people are we talking about?

MUIR: Take the Facebook page in particular, the group dedicated to moving your money. It started just a week and a half ago. Tonight it's more than 8,000 members. And you'll remember the American Bankers Association talked to us earlier this week saying, "If you don't like the rising rates, you can vote with your feet, go to a competitor." Tonight, proof that some customers, very angry customers, are doing just that.

SAWYER: Some of the grassroots heard from out there. Thank you, David.

With ten percent unemployment, and America's banks struggling to get back on their feet, ABC should be ashamed of itself for reporting on this campaign by Huffington and her ilk.

I guess these people won't be happy until everyone in the United States is out of work thereby requiring government assistance to stay alive.