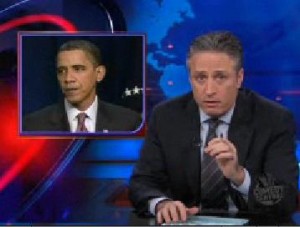 After playing a videotape of the President asking those in attendance at last Thursday's forum "for specific recommendations that can be implemented that will spur on job growth as quickly as possible," Stewart offered a somewhat vulgar idea.

PRESIDENT OBAMA (with chyron under him saying "Jobba The Hunt"): I'm glad you all could join us today for this job forum here at the White House. We've got leaders from just about every sector of the economy...I'm looking for specific recommendations that can be implemented that will spur on job growth as quickly as possible.

JON STEWART, HOST: Okay, okay. $200 billion. Okay. Jobs: from now on, handjobs and b**wjobs count as actual jobs. So, here - friends with benefits get actual benefits. So, don't look at me like I'm crazy.

After playing videotape of some of the CEOs present offering suggestions, Stewart came back to Obama:

STEWART: What about you, Mr. President? You must have brought some of your own ideas.

OBAMA: Not to tip our hand too much, but one of the things I would be surprised if we don't end up moving forward on is an aggressive agenda for energy efficiency and weatherization.

STEWART (With incredulous look on his face): Weatherization? That's the hand you don't want to tip? Cuz if I recall, you've been playing that hand for like a year now.

Stewart then showed clips of Obama talking about weatherization on April 22, February 3, February 10, and January 26.

STEWART: Mr. President, I am not obviously a professional poker player, but that's a s**ty hand. C'mon, man, are these the people we've really been waiting for? These ideas sound like the people we got tired of.

Despite it's crudeness, Stewart once again is showing a willingness to go after Obama.