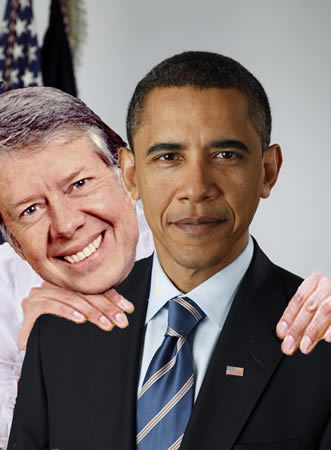 Chris Matthews appears to have lost that loving feeling for Barack Obama.

On "The Chris Matthews Show" Sunday, the once smitten MSNBCer called some of Obama's recent mistakes "Carteresque":

In the Carter presidency, the optics were not exactly robust, and Ronald Reagan rode that to a big victory in 1980. Is the Obama White House sending some Carteresque signals these days?

These "signals" included bowing to the Emperor of Japan, getting nothing on his trip to China, and deciding to try terrorists in New York City.

Potentially as surprising as Matthews bringing these issues up was the Washington Post's Anne Kornblut and David Ignatius agreeing with him (video embedded below the fold with transcript):

CHRIS MATTHEWS, HOST: Welcome back. The word these days is optics, visuals, signals. In the Carter presidency, the optics were not exactly robust, and Ronald Reagan rode that to a big victory in 1980. Is the Obama White House sending some Carteresque signals these days? Some see that in the deep bow to the Emperor of Japan, an unforced error say critics. Then there was, there was what happened in China: Obama got nothing in the way of concessions over there in spite of playing the polite visitor. And his effort to speak directly to the Chinese was jammed by the government. Third, that decision to try the terrorists up in that federal court in New York City. Again, nothing that had to be done, and critics say it shows that Obama, his team doesn't understand this is a war we're in. David, that's the question. These optics are everything in a president. Carter used to carry that garment bag over his shoulder. This president is he making mistakes like in China like in Japan?

DAVID IGNATIUS, WASHINGTON POST : I think he is coming across as stiff. He is talking too much sometimes and communicating too little. So the opposite of what we saw during the campaign. Although the decision to try Khalid Sheikh Mohammed in New York apparently was Eric Holder's, it strikes me that it really is a mistake. I mean, there are too many bad things that could happen. There is no reason to have to have done this. And, you know, it's a political feel for decision-making. That wonderful thing you just did about President Johnson's feel for the moment. That's what I think is missing now with this group in the White House. I don't know where it's gone. They certainly had it during the campaign. Maybe they'll get it back. But it's missing now.

ANNE KORNBLUT, WASHINGTON POST: This was the big moment of the whole trip to Asia in fact, eight days in Asia he was going to speak to Chinese students in Shanghai unfiltered at least in his answers, and in fact the Chinese government, you know, they allowed the event to take place, but it was only shown locally on Shanghai television. People didn't see it. The one piece of news he made in it saying that the internet should be free and people should have access dribbled out to the Chinese public and then started being deleted from all the Chinese websites. So, then, the following day he held a quote unquote press conference with the Chinese President Hu Jintao in which there were no questions and they read statements. Now, this is of course, this is the Chinese, it's their home turf. They were allowed to do what they wanted to. That was the White House's argument. And the White House haggled with them to get it more open.

MATTHEWS: The White House got jammed here. Did they know this was coming, that it wouldn't get to the people?

KORNBLUT: Sure. They knew, previous presidents had been allowed to reach the Chinese public. They knew that it might or might not. It did. But they didn't have to stand there at a press conference, call it a press conference, and not answer questions. And I think they're expect, they may have raised expectations a little for how much they were going to be able to do.

*****Update: The day after this installment of "The Chris Matthews Show" was taped, Newsweek's Howard Fineman claimed Obama is a lot like Ronald Reagan!