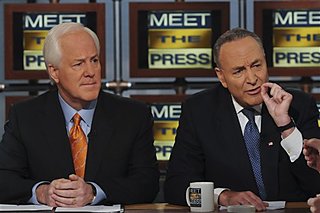 We're trying, in our healthcare bill, to have it paid for so it doesn't raise the deficit a nickel. When they had the big Medicare increase, $400 billion, they didn't even try to pay for it. We're trying to pay. We've said we will pay for the war in Afghanistan. One trillion dollars, war in Iraq, they didn't pay a nickel for it. The debt in January, when George Bush left, voted for by lock, stock and barrel with all the Republicans was much, much greater. Now Barack Obama and we Democrats, this is counterintuitive but true, are really trying to get a handle on balancing the budget and we're making real efforts to do it. That's why health care is more limited than people would want it to be. And we--they say, "Well, it's not good enough." Well, join us and help us. But you sure didn't try to make it all good when you were in power.

Now, if Gregory was a real journalist, he could have taken this statement by Schumer apart.

For instance, the Medicare bill Schumer was referring to, the Prescription Drug and Medicare Improvement Act of 2003, passed the Senate by a vote of 76-21. 35 Democrats voted in favor, including most importantly Schumer.

Mightn't it have been good of Gregory to point out to the Senator that he and 34 of his fellow Democrats in the Senate voted for something he's now blaming the Republicans for?

Taking this further, Schumer's claim, "The debt in January, when George Bush left, voted for by lock, stock and barrel with all the Republicans," was actually more absurd.

When the final conference report moved to the House on June 4, NOT ONE Republican voted for it. Not one.

As such, the fiscal 2009 budget that was in effect when Obama took office was almost exclusively approved by Democrats; Obama was one of them.

Gregory could therefore have challenged Schumer's assertion that the debt in January was "voted for by lock, stock and barrel with all the Republicans."

Yet, moments later when the subject changed to the war in Afghanistan, Gregory was suddenly feeling feisty and argumentative (relevant section at 1:00):

SEN. CORNYN: Americans are fighting and dying in Afghanistan today as they have for the last seven years. I don't understand, for a president who said this is a war of necessity to now question the recommendation of his lead commander General McChrystal...

SEN. CORNYN: ...on resourcing the war in order to be successful and win.

SEN. CORNYN: I think we've learned that we need a, a change of strategy as, as, as opposed to just raw numbers.

GREGORY: It's a simple question. Did they provide enough troops to win in Afghanistan?

SEN. CORNYN: And winning in Afghanistan may be different from Iraq because of the, of the nature of the country.

GREGORY: But did Bush and Cheney provide the troops to win?

GREGORY: So they didn't. You don't think they did?

SEN. CORNYN: David, the problem is it's not just--as we saw on the surge in Iraq, it's not just the troops, it's the change of strategy.

GREGORY: ...if you say that this president should commit more troops, can't you render an opinion about whether the previous administration that started the war provided the resources to win it?

SEN. SCHUMER: Hey, David, we all know the facts here.

SEN. CORNYN: Well, if I can answer the question.

SEN. CORNYN: I think the--my problem with your question, David, is you're assuming that just additional troops will achieve a victory. It will not. What we need is a change of strategy. We need a counterinsurgency strategy such as General Petraeus and General Odierno executed in Iraq.

SEN. CORNYN: ...which is what General McChrystal's recommending in Afghanistan, I think our chances of success are good.

Some difference, wouldn't you agree?

Maybe someone at NBC should inform Gregory that if he's going to challenge his guests, he should try to challenge all of them, not just the ones with Rs next to their names.