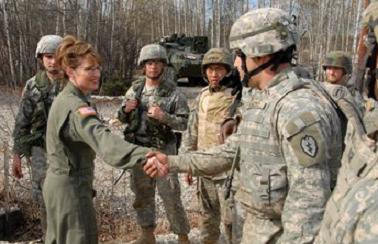 Former Alaska Governor Sarah Palin has some outstanding advice for all Americans on the 8th anniversary of 9/11:

Please thank a veteran today. They certainly do not look for those thanks, but they have more than earned it.

Remembering 9/11: We Are Americans
It has been eight years since the United States suffered the worst attack on our soil since Pearl Harbor. As we look back, we should take stock of what has transpired since then. We have sent our nation's soldiers into battlefields far from home to defend us. These brave men and women live in treacherous conditions, facing improvised roadside bombs, suicide bombers and other attacks. Yet they fight on in their mission to defend the United States and all of us without complaint.

Our all-volunteer service is made up of Americans of all races, creeds, and economic backgrounds. These soldiers are on the front lines of this battle, and there are others in the fight as well. We must continue to give our utmost support to the United States military and those that support their efforts. In light of this, I have added my name to a letter sent to President Obama urging him to remain committed to prosecuting the War on Terror in Afghanistan. Never have so few defended the liberty of so many. We must continue to support their mission because they will continue to fight for us.

President Reagan ended his first inaugural with this story:

Under one such marker lies a young man-Martin Treptow-who left his job in a small town barber shop in 1917 to go to France with the famed Rainbow Division. There, on the western front, he was killed trying to carry a message between battalions under heavy artillery fire. We are told that on his body was found a diary. On the flyleaf under the heading, "My Pledge," he had written these words: "America must win this war. Therefore, I will work, I will save, I will sacrifice, I will endure, I will fight cheerfully and do my utmost, as if the issue of the whole struggle depended on me alone." The crisis we are facing today does not require of us the kind of sacrifice that Martin Treptow and so many thousands of others were called upon to make. It does require, however, our best effort, and our willingness to believe in ourselves and to believe in our capacity to perform great deeds; to believe that together, with God's help, we can and will resolve the problems which now confront us. And, after all, why shouldn't we believe that? We are Americans. God bless you, and thank you.

As we look back to that tragic day eight years ago we take pride in the fact that we came together as a nation in the days, months and years that followed. We rose to the challenge that fateful day and we still can. And why shouldn't we believe that? We are Americans.

I thank all our servicemen and women, in and out of uniform, for keeping us safe over the last eight years in the face of enormous odds.

Please thank a veteran today. They certainly do not look for those thanks, but they have more than earned it.