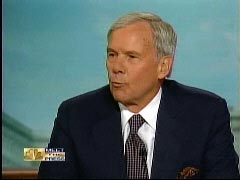 If you needed any more proof that liberal media members don't give a darn about the state of the economy or the American people, and instead just want to raise taxes, you got it Sunday when Tom Brokaw advocated gas prices, which have plummeted recently, be kept at $4 a gallon with government keeping the added cost.

Coming just two days after it was announced that America lost over 500,000 jobs in November, Brokaw, in what could be his last performance as "Meet the Press" host, actually asked Barack Obama why taxes shouldn't be dramatically raised on gasoline with revenues to be spent on alternative energy, and to send a signal that folks won't be able to "just fill up [their] tank for 20 bucks anymore."

This came in response to president-elect uttering another disturbingly socialist statement that should make clearer his spread the wealth motives (video embedded below the fold with relevant section at 6:00, readers are encouraged to review Mark Finkelstein's earlier piece on this subject, file photo):

BARACK OBAMA: And what we still see are executive compensation packages for the auto industry that are out of line compared to their competitors, their Japanese competitors who are doing a lot better.

Stop the tape. If one of the answers to solving the auto industry problem is making our executives accept the same compensation as our Japanese competitors, shouldn't this be true across the board for ALL employees working for American car companies? If executives, as part of a bailout, are required to take pay cuts putting them in line with what Japanese executives make, shouldn't ALL the employees be so impacted?

Sadly, this didn't come up:

BARACK OBAMA: Now, it's not unique to the auto industry. We have seen that across the board. Certainly, we saw it on Wall Street. And, part of what I'm hoping to introduce as the next president is a new ethic of responsibility where we say that if you're laying off workers, the least you can do when you're making $25 million a year is give up some of your compensation and some of your bonuses. Figure out ways in which workers may have to take a haircut, but they can still keep their jobs, they can still keep their healthcare, and they can still stay in their homes. That kind of notion of shared benefits and burdens is something that I think has been lost for too long, and it's something that I'd like to see restored.

Have you ever heard a better definition of socialism? Yikes. Alas, here's how Brokaw responded:

Let's talk for a moment about consumer responsibility when it comes to the auto industries. As soon as gas prices dropped, consumers moved back to the larger cars once again. The SUVs are the big gas consumers. Why not take this opportunity to put a tax on gasoline, bump it back up to $4 a gallon where people were prepared to pay for that, and use that revenue for alternative energy and as a signal to the consumers: "Those days are gone. We're not going to have gasoline that you could just fill up your tank for 20 bucks anymore."

Wow. We certainly wouldn't want cheaper energy prices to help us out of the current recession, would we Tom?

I don't know about you, but I sure hope David Gregory is going to bring more common sense and economic acumen to the "Meet the Press" table now that he's been named as Tim Russert's permanent replacement.