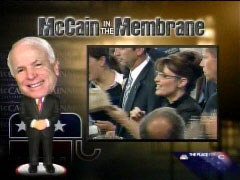 Not only is this categorically false, it appears likely Olbermann got this erroneous information from the far-left website ThinkProgress which NewsBusters has shown in the past to be a source for some of the "Countdown" host's material.

Problem: As the chief executive up north, she vetoed $275,000, crossed it out, of the state funding of the Special Olympics. She cut the Special Olympics budget in half and is campaigning as an advocate for special needs kids. That’s pretty sick. Well, at least we do know which charity I should donate that hundred bucks to every time she lies about her record: the Alaska Special Olympics.

Campaigning in Colorado today, Gov. Sarah Palin (R-AK) promised renewed attention to kids with special needs. She declared, “Ever since I took the chief executive’s job up North I pushed for more funding for students with special needs,” and cited her own family’s experience with the issue. [...]

It’s a stretch to say she “pushed” for any policy improvements. Though Palin did sign a law increasing special education funding in Alaska, “she had no role whatsoever” in its development, according to the bill’s author, Rep. Mike Hawker (R). Moreover, as governor, Palin vetoed $275,000 in Special Olympics Alaska funds (Page 100, SB 221 with vetoes), slashing the organization’s operating budget in half.

Sadly, what's on display here is either a shocking ignorance concerning budgets, or a willful intent to deceive.

That DOES NOT mean this operating budget was cut in half. Instead, it means what was PROPOSED, or, as we'll see in a moment, what was ASKED for by Special Olympics Alaska at the beginning of the budget process was approved for half the initial request.

Yet, most importantly, the final approval represented an increase from the previous year.

As such, in her second year as governor, Sarah Palin increased spending on Special Olympics Alaska by 10 percent RATHER than slashing it the 50 percent Olbermann and Think Progress claimed.

While the Special Olympics did not want to make any comments about budget cuts, Channel 2 News looked into the governor's funding of the program.

Records show Palin actually increased their funding by $25,000. However, that amount is only half of what the program asked for.

To be sure, it is no surprise that ThinkProgress got this wrong, for as NewsBusters has chronicled on numerous occasions, this is just a leftwing shill.

However, for Olbermann to simply repeat what came from this propaganda outlet -- or wherever he got this nonsense from! -- without doing any fact-checking whatsover to confirm these allegations is disgraceful, and should act as further evidence to the heads of MSNBC and NBC News that this man has no business anchoring a program on a cable news network.

Beyond this, if either of these entities has any integrity, we should expect expeditious retractions concerning this matter. While we're at it, the New York Times should also issue a retraction for making this same mistake in its September 7 article.