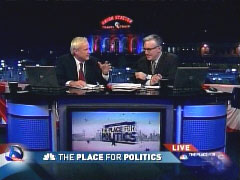 Last week was a fabulous one for all those fighting liberal media bias.

On Wednesday, the crowd at the Republican National Convention spontaneously chanted "NBC, NBC" when vice presidential nominee Sarah Palin complained about how she was being portrayed by the press.

Days later, while recording "The Chris Matthews Show" to be aired on Sunday, NBC's Andrea Mitchell changed her mind about the Palin pick, and declared it an A-plus decision by Republican presidential nominee John McCain.

Sunday morning interviews with Barack Obama and Joe Biden on ABC's "This Week" and NBC's "Meet the Press" respectively were uncharacteristically hard-hitting and fact-based as opposed to the sycophancy the nation has been witnessing for many months.

And finally, on Sunday evening, it was announced that MSNBC was replacing election coverage co-anchors Chris Matthews and Keith Olbermann with David Gregory. This raises an important question:

Is all the complaining about liberal media bias -- not just by organizations like the Media Research Center and NewsBusters, but also by Republicans like McCain and Palin -- causing folks in newsrooms across the fruited plain to tone down their Obama-lovin'?

Consider if you will the following Time magazine piece published this morning (emphasis added):

What began as the campaign's mid-summer turn away from McCain's freewheeling give-and-take with the press has turned into an all-out war on the media.

For the past week, the campaign has written off much of the skepticism about the qualifications of vice presidential pick Sarah Palin as the reaction of a biased media establishment out of touch with real Americans. "She's not part of the Washington D.C. cocktail circuit," Steve Schmidt, one of McCain's senior advisers, told TIME. "Elite opinion looks down with contempt at people who are not part of their world." [...]

[T]he campaign has fired off public letters charging bias at news organizations as varied as Newsweek and the MSNBC. During the GOP convention, they cancelled McCain's appearance on Larry King Live in retaliation for the supposedly unfair questioning CNN anchor Campbell Brown pursued with a campaign spokesman. And they have complained privately about coverage to many other news outlets, including TIME.

But the approach also reflects what aides describe as McCain's increasing personal frustration with the press. He is aggravated, aides say, by what they contend is the mainstream media's favoritism for Barack Obama — proven, they contend, by the volume and tone of coverage the Democratic nominee receives. McCain also feels that his inquisitors are consumed with the pursuit of frivolous 'gotcha' questions. [...]

Though McCain was one of the last holdouts in his campaign for continuing the signature "Straight Talk" sessions, he now embraces a tightly supervised separation from the media pack. He has not held a press conference since early August, and reporters traveling with him can go days without seeing the candidate up close, and weeks without the opportunity to exchange a word with him. In a recent pre-convention interview with TIME, McCain dismissed many of the questions — including ones that seemed benign to the reporters posing them — as gotcha attacks, and refused to answer others. He was similarly brusque in an August interview with Politico.  [...]

Complicating the debate is the metastasis of informal, and unreliable, information sources online. As soon as the Palin pick was announced, liberal-leaning websites and blogs swirled with rumors about Palin's personal life, and in its critique of the press, surrogates for McCain have conflated such websites and opinion columnists with the reporting of major news organizations.

Whether the confusion between news sources is real — and it's understandable, given the dramatic changes in the media landscape between the 2004 and 2008 elections — or convenient strategy, there's no question that anger at the press can be effective.

Given the events of the past week, apparently very effective. Yet, it remains to be seen how long-lasting this response will be.

After all, it took a February 23 "Saturday Night Live" sketch about CNN debate moderators being totally in the tank for Obama to jolt media members into covering the Democrat primaries more fairly. Unfortunately, this "balance" was short-lived, for once Hillary Clinton conceded to Obama in June, the press quickly went back to almost exclusively covering the junior senator from Illinois whilst paying little attention to McCain.

Do a couple of relatively balanced interviews, a change of position concerning Palin, and a couple of demotions at MSNBC signal a trend shift? Did Wednesday's "NBC, NBC" chant act as a wake-up call for all media outlets, or just those owned by General Electric?

On the other hand, is it possible the success of the RNC, as well as McCain's dramatic increase in popularity following his choosing Palin as his running mate, are the jolts media needed to change their reporting?

Consider for a moment the polls suggesting all year that this should be a strong election cycle for Democrats. With the number of folks claiming to be Republicans on the decline the past couple of years, might some of the Obama-lovin' coverage have been media shifting to the left not just to assist his candidacy, but also in expectation that he was going to win?

Now that Palin has so energized the GOP base, and the Republicans have concluded the most-watched convention in history, the polling data just released showing McCain with a ten point lead over Obama amongst likely voters has to shake up the media calculus a bit.

As the Time piece indicated that McCain has been pushing away from the press the past couple of months due to their biases, they might not have minded if the convention went poorly, and the Republican ticket was still lagging in the polls.

But now that Palin appears every bit the rock star Obama is, and a resurgent McCain has taken the lead with less than two months to go before Election Day, press members might be thinking that they'd better be kinder to the Republican ticket, while scrutinizing the Democrats a little more thoroughly, if they want to have any access to McCain and Palin either now or in the future.

This seems critical given McCain's rise in popularity coming coincident with the press having less access to him. If the Arizona senator and his running mate feel that they can win this election without coverage from the mainstream media, traditional press outlets could become even more irrelevant to the teeming hordes of Americans choosing to get their news elsewhere.

Think about it: news media are about to conclude eight years of what they believe to be an unfriendly relationship with the White House during which time their viewership and readership have declined as talk radio and New Media outlets thrived.

Of course, their Bush Derangement Syndrome leads most of them to believe this situation was all the Administration's fault.

Regardless, with all the lovin' they've been given to Obama since he first announced his candidacy, press members must have been hoping that by this stage of the campaign the junior senator from Illinois would be nicely in the lead, and that all of their efforts to get him there would be paying off.

As this eventuality is now clearly in jeopardy, media might be starting to hedge their bets in case the McCain-Palin momentum continues right through November 4. This might not be just to improve their relationship with the duo that might be heading to the White House, but also to protect their jobs if at least four more years of Republican control of the executive branch of our government actually comes to fruition.

As Ed Hart used to say on the old Financial News Network, we will know in the fullness of time.