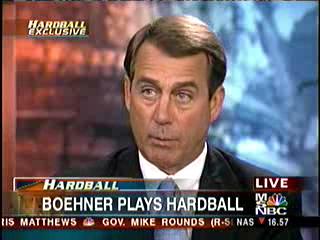 House Republican Leader John Boehner (R-Ohio) sent a letter to the chairman of the Federal Communications Commission Wednesday urging him to drop recent proposals which amount to "a sweeping takeover by Washington bureaucrats of broadcast media."

In his correspondence, Boehner claimed the "proposals and recommendations for Commission action contained in the NPR amount to the stealth enactment of the Fairness Doctrine, a policy designed to squelch the free speech and free expression of specifically targeted audiences."

What follows is the complete text of this letter which should be of particular interest to all Americans in favor of free speech on the airwaves (emphasis added, file photo):

Re: Report on Broadcast Localism and Notice of Proposed Rulemaking in MB Docket No. 04-233

Under the rubric of "broadcast localism" it is clear the Commission is proposing no less than a sweeping takeover by Washington bureaucrats of broadcast media. The proposals and recommendations for Commission action contained in the NPR amount to the stealth enactment of the Fairness Doctrine, a policy designed to squelch the free speech and free expression of specifically targeted audiences.

Forcing licensees to recreate so called "advisory boards" of a by-gone era will encumber broadcast media with onerous bureaucratic burdens not faced by cable, satellite, or Internet. The report's assertion these boards would help stations "determine the needs and interests of their communities" or promote "localism and diversity" borders on fantasy. The recreation of pre-1980s advisory boards will place broadcast media squarely on a path toward rationed speech.

Two other proposed rules completely disregard a generation of technological and media advancement. Both the Main Studio Rule and rules regulating the physical operation of stations suggest the Commission has apparently decided to regulate broadcast media based on the needs of 1934 (the year FCC was created) instead of the proven realities of 2008.

Licensees and stations should serve the needs of local citizens. But adding more restrictions and Washington mandates is retrograde considering the constant technological evolution of the media market. I urge the Commission to rescind these proposed rules.

It should be very interesting to see where this matter goes in the coming months. Stay tuned.