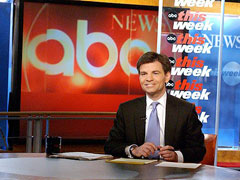 Just how far to the left is ABC's George Stephanopoulos?

I guess we now know what George is reading while he's prepping for the show.

To set this up, Stephanopoulos and Gingrich were discussing how wide open the GOP presidential race looks, and the possibility of a brokered convention, when the host actually said with a smile on his face:

The website Daily Kos, which supports Democrats, is actually urging Democrats to cross over and vote in the Republican primary. Vote for Mitt Romney, so that the Republican race is wide open, and it takes them forever to come up with a nominee.

Isn't that special? Not only does MSNBC have a disgraceful primetime host that relies heavily on the Clinton front organizations Media Matters and Think Progress for his material, but now the Washington Bureau Chief for ABC News has let the cat out of the bag that he's a Daily Kos reader.