Ann Coulter Explains Her ‘Jews Need to be Perfected’ Comment 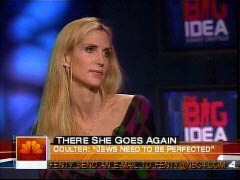 Well, sports fans, the conservative hit parade continued last week, for having first accused Fox News's Bill O'Reilly of being a racist, and Rush Limbaugh of being anti-military, the whackos on the left have now branded Ann Coulter an anti-Semite.

Expectedly, Hillary Clinton's Media Matters for America was once again right in the middle of the controversy.

Fortunately, much like Limbaugh and O'Reilly before her, Coulter wasn't taking the attacks lying down, and, instead, explained what was meant by her statements - which was clearly lost on the secular media - to Steve Malzberg of WOR Radio Thursday (audio available here):

Neither do I, Ann. Please continue with your lesson for the uneducated about what you meant by Jews being perfected:

That comes from that raging anti-Semite St. Paul. This is a straight statement of Christian doctrine...This is what Christians believe. We believe the Old Testament, and we think the New Testament completes that. I mean, the New Testament is obviously anticipating some Christ coming. Jews say, "Not that Christ. You got the wrong one."...I was just saying that we consider when Jews become Christians, that is becoming a perfected Jew. And that is precisely the theological term.

As the Oxford University Guide To the New Testament points out, even some Jew once named Saul said the very same thing she did:

Continuity and Superiority: The Epistle to the Hebrews

Although Hebrews is often called a letter, it does not contain an epistolary prescript, it does not name the author or the addressees, and it does not include an opening prayer or thanksgiving. It is more likely an early Christian homily. The book is anonymous, although it has traditionally been attributed to Paul. The emphases in the book, however, are not Pauline.

The Epistle to the Hebrews asserts the superiority of Christ to the prophets, the angels, Moses, Joshua, and the Jewish priesthood. Christ brings a superior covenant, a superior tabernacle, and makes a superior sacrifice. Like many other authors whose task is Christian self-definition, this author uses the Hebrew Scriptures to illustrate the authenticity of his claims. For example, several Old Testament prophets mention a new covenant that God will make with the Jews. Drawing on Platonic thought, this author argues that the old covenant was a foreshadowing of the new, an imperfect reflection of a perfect reality.

Scholars do not know when or where this book was written. It is clear, though, that the author was concerned to define group boundaries. He argued that Christianity represented the perfection of Judaism. Christianity was the religion foretold by the prophets. Those who did not believe that Jesus was the Messiah, moreover, were not the true people of God.

One would think St. Paul could be considered an authority on Christianity.

But if that isn't enough, how about the Catholic Encyclopedia? From its entry on the New Testament:

Other doctrines, specifically Christian, are not added on to Judaism to develop, but rather to supersede it. In reality, between the New and Old Testaments there is a direct but not revolutionary succession as a superficial observer might be inclined to believe; just as in living beings, the imperfect state of yesterday must give way before the perfection of today although the one has normally prepared the other. If the mystery of the Trinity and the spiritual character of the Messianic Kingdom are ranked among the peculiarly Christian dogmas, it is because the Old Testament was of itself insufficient to establish the doctrine of the New Testament on this subject; and still more because, at the time of Jesus, the opinions current among the Jews went decidedly in the opposite direction.

As such, Coulter was spot on when she told Malzberg:

People who have no knowledge of religion should not, for one thing, probably talk about it, but should certainly not go around getting their noses out of joint about it.

Yes, Ann, but none of this is about knowledge or religion. The left are hunting for witches, and you are sadly one of their prime targets.

With that in mind, should we expect Sen. Majority Leader Harry Reid (D-Nevada) to be offering a resolution next week condemning Coulter's words?